Starting life as a free man at age 65, Long, who spent 44 years in prison for a rape he did not commit, urged Duke Law students to work for "serious criminal justice reform." He is the Wrongful Convictions Clinic's ninth exoneree. 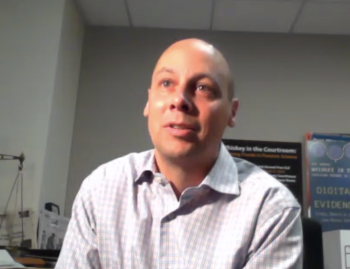 Newly free after spending 44 years in North Carolina prisons for a crime he did not commit, Wrongful Convictions Clinic client Ronnie Long urged Duke Law students to commit to acquiring as much education and knowledge as possible and using it for just causes.

“All I ask is that you be positive, sincere, and dedicated to doing what is right,” Long told a virtual audience of Duke Law students, faculty, and staff during a lunchtime event. “We have so much wrong going on today that positive minds are essential for the survival of this state, this nation.

“I encourage you to hold onto your dreams, to know that you can accomplish whatever you set your heart and your mind to. Believe in yourself and you can make a change. Duke Wrongful Convictions Clinic did.”

Long spoke on Oct. 1, the 44th anniversary of his wrongful conviction for rape and the day before International Wrongful Conviction Day.

Now 65, Long was released from Albemarle Correctional Institution on Aug. 27, after the U.S. Court of Appeals for the Fourth Circuit found that his 1976 trial before an all-white jury was tainted by police misconduct and the suppression of exculpatory evidence. He is the ninth man exonerated by the clinic, which took Long’s case in 2015. Long’s legal team included Clinical Professor Jamie Lau ’09 as lead attorney, Charles S. Rhyne Clinical Professor of Law Theresa Newman ’88, and John S. Bradway Professor James E. Coleman, Jr., who with Newman co-directs the clinic.

Lau recounted Long’s case and the path it took through the courts, noting that his client could well have been executed for a crime he didn’t commit. On May 10, 1976, the day Long was arrested, rape carried a mandatory death sentence in North Carolina. But less than two months later the U.S. Supreme Court struck down that statute in Woodson v. North Carolina. Long was convicted by an all-white jury in Concord, N.C., on Oct. 1, 1976.

At the event, Lau played audio clips from the May 7 oral argument before the full Fourth Circuit, during which Chief Judge Roger Gregory and Judge James Wynn sharply questioned N.C. Assistant Attorney General Phillip Rubin ’11 about why the state continued to argue against releasing Long while also acknowledging police misconduct and the withholding of exculpatory evidence, including 43 fingerprints taken from the crime scene that did not match Long’s.

“What is it about us that we want to prosecute and keep people in jail when we know evidence may exist that might lead to a different conclusion?” Wynn asked. “When did justice leave the process so we let our rules blind us to what we all can see?”

The Fourth Circuit issued its opinion Aug. 24, ruling 9-6 that Long’s due process rights were violated at his 1976 trial, and two days later the state effectively gave up its case and moved to vacate his conviction and secure his immediate release.

After watching footage of Long reuniting with family outside the prison, the audience saw images from his first month of freedom – playing with dogs, singing along in the car to Barry White, and trying Häagen-Dazs ice cream – which he’d heard about in prison but never tasted.

“There was a time in my life when all of this – sitting on a deck, watching the sun rise, being able to eat what I want for breakfast, being able to get in the car and move like I want to – one time it was unimaginable,” Long told the students.

“I’m doing life one day at a time, one hour, one minute, one second and enjoying just being free. The experience is something I would never want to put another man through, to be behind fences. But to overcome all that adversity and be able to sit here and be with my wife and my family, with the time God gives me to remain here on this earth I’m going to try to enjoy it to the fullest.”

When asked how he survived 44 years inside a system he described as “heinous, toxic, and corrupt,” Long said he was bolstered by a community of supporters and drew on the guidance of a superior being. He said he hopes to go on a road trip to meet and thank those who prayed for him and worked for his release.

“My inspiration came from people who believed in my innocence. And I knew that if I had all these people fighting on the outside, I couldn’t help but continue to fight on the inside," he said.

"I want the students to know they are a major part of my being in my backyard right now. The reason I’m sitting here is because of God, the support, and the Duke Wrongful Convictions Clinic.”