For Alston & Bird Professor Ernest Young, an invitation to deliver a distinguished lecture commemorating the sesquicentennial of the 14th Amendment to the U.S. Constitution was not a call to celebrate unequivocally the Amendment’s civil rights legacy. 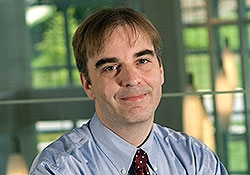 Instead, in his Boden Lecture at Marquette University Law School and now in a forthcoming Marquette Law Journal article, Young used the “dark valley” of the amendment’s early decades — when the promise of liberty and equality for black Americans crumbled amid a retrenchment of white supremacy — to highlight “downside risks” in the evolution of constitutional interpretation and advocate a measured, more incremental approach to change.

Young, a noted authority on the constitutional law of federalism, has delved into questions of interpretive theory at intervals throughout his scholarly career. He is a self-identified conservative living constitutionalist; the theory posits that the document’s meaning can and should evolve over time, rather than being wholly determined by the original understanding of the text. But looking at the grim historical record of the 14th Amendment’s “bad years” through the lens of living constitutionalism’s multiple interpretive modalities illustrates how those methods undergirded regressive policies, practices, and judicial rulings that served “to undermine and narrow the Amendment’s commitment to black equality.”

With the title of his article, “Dying Constitutionalism and the Fourteenth Amendment,” Young offers a contrast to the “dead,” static constitution expounded by the late Justice Antonin Scalia, a famous originalist.

“By ‘dying,’ I mean that a constitutional principle can become less constraining, less binding, less vibrant, less meaningful over time through ordinary processes of evolutionary interpretation — all the mechanisms of living constitutionalism,” he said in an interview. “I think constitutional principles need to be stickier. The current debate about living constitutionalism doesn’t talk about the times when it has gone badly and moved the Constitution in ways most people would acknowledge to be the wrong direction.” But it’s impossible to just tell people to “be more incrementalist,” he added with a laugh. “I think the way you change the culture is to put the fear of God into people, by showing them examples of where the failure comes by making the Constitution too easy to change.”

“There needs to be a sense of tragedy. You might very well believe, in any given instance, that it’s worth the risk to push ahead and haul up the anchor, but you certainly shouldn’t do it without a strong sense, based on our constitutional experience, for how quickly constitutional change can be used to move in bad directions.”

Young argues in his article that after its 1868 ratification, it was too easy to change the 14th Amendment in ways that moved it into the path of tragedy and away from its core liberating purpose. For one thing, he writes, its language did not entrench existing rights but was designed “to force reform to achieve some desired future state.” The amendment thus depended on the political and judicial branches for implementation at a time when politicians, judges, and the broader populace alike lacked any preexisting or unifying vision for making the concept of equality before the law for black Americans a reality. At the time, they likely had not imagined that civil rights might also encompass such “social rights” as the right to belong to the same club or to go to the same school, Young said, or the extent to which political rights, separately enshrined in the 15th Amendment, were essential to protect civil rights.

“There was no consensus understanding about what to do when these categories that the amendment’s Framers thought were separate turned out to conflict,” he said. Because the original understanding was essentially open-ended on many points, “the evolving social and political context tended to press courts and other interpreters — consciously or unconsciously — to resolve these conflicts in line with contemporary social mores,” he said.

Any commitment to those principles, he writes, came into early and lasting conflict with “the residual racism and resistance to change of even the northern electorate,” and organized opposition from diverse constituencies: white supremacist Redeemers who controlled Southern state governments, labor unions fearing competition from black workers, anti-immigrant populists and progressives who “sympathized with Southern radicalism,” and frustrated women’s advocates who also sought equality under law. Young cites war-weariness and the urge for reconciliation between North and South as strong, albeit stealthy, forces against minority interests; not only did President Ulysses S. Grant quickly tire of sending troops to quell violent attacks on Southern blacks, but a resolution to the deadlocked 1876 election was secured through a promise to withdraw Union troops from the South, effectively ending Reconstruction. Another failure of political will can be found in Congress’s refusal to enforce the penalties outlined in Section 2 of the 14th Amendment for denying voting rights to black men, he said.

The judiciary didn’t help, with the Supreme Court undercutting the 14th Amendment in 1883 by striking down the Civil Rights Act of 1875 in the consolidated Civil Rights Cases. While the statute had banned race discrimination in access to services offered to the public, the Court held that Congress lacked authority to regulate the “private affairs” at issue when blacks were suing for access to hotels, theaters, and transit. While nothing in that ruling legitimated the state-mandated segregation of the Jim Crow system, the ruling seemed to ratify the political branches’ decision to bring Reconstruction to a close and portended a shift in the Court’s 14th Amendment jurisprudence to other issues, such as the freedom of business from economic regulation.

Had its framers and interpreters viewed the 14th Amendment as locking in “not so much a particular view of social versus political versus civil rights, but just the basic proposition that they were enacting this amendment to liberate people,” Young maintains the backsliding that occurred would have likely been harder. That doesn’t mean, however, that he rejects evolution in constitutional meaning.

“If we let the movement of history into interpretation — as opposed to history’s state at an originalist snapshot in time — then we let in the contingency that comes with it. What I am suggesting is that constitutional culture may be more important than constitutional method when it comes to hanging on to constitutional values. I think we need to change the culture of living constitutionalism if we are going to prevent future tragedies, like the dying constitutionalism of the Fourteenth Amendment’s lost years.”

The cultural change Young proposes involves making living constitutionalism “a little less lively” by tying changes in constitutional meaning to “very sustained trends over time.” It’s an approach that has held an “almost dispositional” appeal for him since taking a deep dive into the political theory of Edmund Burke, first as an undergraduate and later as a law student; his third-year capstone paper at Harvard Law, “Rediscovering Conservativism: Burkean Political Theory and Constitutional Interpretation,” (72 North Carolina Law Review 619-724 (1994)) became his first published scholarly work.

“My paper argued that a lot of the thought dominating legal conservativism in this country — originalism and bright-line rules over flexible standards — actually wasn’t particularly conservative from a Burkean standpoint,” said Young. He plans to develop ideas from that piece, along with “Dying Constitutionalism” and other works on interpretive theory, in a forthcoming book. Burke, he said, articulated a “positional conservativism” that promoted slow, incremental, yet constant reform over radical change.

Although it can seem tempting to broaden the scope of the sources of constitutional meaning to make room for the Constitution over time, Young said that he learned from Burke “that things don’t always get better. Sometimes they get worse.

“Society is really complex and really fragile, and the gains we have are hard won. If you start allowing for change you can go backwards as well as forwards.”

The “stiff-necked” constitutionalism Young proposes might lack “the exciting potential for surprising and inspiring moral growth,” he concluded in “Dying Constitutionalism.” “But a stiffer, creakier, even grumpier constitutionalism might also make it harder to go from ratification of a Fourteenth Amendment committed to black equality to the Civil Rights Cases in 15 years, or from a Fifteenth Amendment committed to black suffrage to the abandonment of black voters to murderous white supremacist mobs in just five.”