Walter Dellinger is the Douglas B. Maggs Professor Emeritus of Law at Duke University. He was a resident faculty member at Duke continuously from 1969 until 1993. He served as acting Solicitor General for the 1996-97 Term of the Supreme Court. Dellinger argued nine cases before the Court, the most by any Solicitor General in more than twenty years. His arguments included cases dealing with physician assisted suicide, the line item veto, the cable television act, the Brady Act, the Religious Freedom Restoration Act and the constitutionality of remedial services for parochial school children.

After serving in early 1993 in the White House as an advisor to the President on constitutional issues, Dellinger was nominated by the President to be Assistant Attorney General and head of the Office of Legal Counsel (OLC) and was confirmed by the Senate for that position in October, 1993. During his three years as Assistant Attorney General he served as the Department's principal legal advisor to the Attorney General and the President. As head of OLC, Dellinger issued opinions on a wide variety of issues, including the President's authority to deploy United States forces in Haiti and Bosnia; whether the President may decline to enforce statutes he believes are unconstitutional; affirmative action; religious activity in public schools; whether the Uruguay Round GATT Agreements required treaty ratification, and a major review of separation of powers questions. He provided extensive legal advice on loan guarantees for Mexico, on national debt ceiling issues, and on issues arising out of the shutdown of the federal government.

Professor Dellinger has published articles on constitutional issues for scholarly journals including the Harvard Law Review, the Yale Law Journal, the Duke Law Journal and has written articles for the New York Times, the Washington Post, Newsweek, the New Republic and the London Times. He spent 1988-89 as a Fellow at the National Humanities Center. He has lectured at numerous American universities and at Leiden, Utrecht, and Tilburg Universities in the Netherlands, at the University of Florence and the University of Siena in Italy, at the University of Copenhagen, Denmark, at Nuremberg University in Germany, at the National University of Mexico, at the Catholic University in Leuven, Belgium and at conferences in Rio de Janeiro and Rome. He has addressed the Judicial Conferences of the DC Circuit, the Fifth Circuit, the Second Circuit and the Fourth Circuit, the American Bar Association, the Association of American Law Schools, the Organization of American Historians, the American Political Science Association, the Modern Language Association, the Federalist Society and other groups. He has been a member of the Board of Editors of The American Prospect and a member of the Executive Committee of the Yale Law School Association.

Before joining the government, he briefed and argued cases for a variety of clients, including Owens-Illinois, Inc., the State of Alaska, hospital associations and members of Congress on issues ranging from the right of hospitals to sue state officials for reimbursement, to Alaska's taxation of oil revenues, to limits on punitive damages and other mass tort issues.

He has testified more than twenty-five times before committees of the Congress, including the Senate Budget Committee, the Senate Committee on Labor and Human Resources, the Senate Appropriations Committee, and the House and Senate Judiciary Committees.

Walter has been married since 1965 to Anne Maxwell Dellinger, a Professor of Public Law & Government at the University of North Carolina's Institute of Government. Anne Dellinger specializes in public health law. In 1980-81, she served at the Federal Bureau of Investigation as Special Assistant to the Director, Judge William H. Webster. They have two sons, Hampton (born 1967), who is serving as Special Counsel to the Attorney General of North Carolina, and Andrew (born 1970), an instructor in religion at Prescott College in Arizona.

Walter Dellinger is a graduate with Honors in Political Science from the University of North Carolina where he was awarded the John J. Parker Medal for Leadership and the Frank Porter Graham Award as Outstanding Senior. He graduated from Yale Law School, where he was an editor of the Yale Law Journal. For the 1968-69 Term of the United States Supreme Court he served as law clerk to Justice Hugo L. Black. 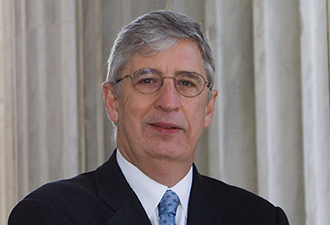