Stephen E. Sachs is a scholar of civil procedure, constitutional law, Anglo-American legal history, and conflict of laws. He joined the Duke Law faculty after practicing in the litigation group of Mayer Brown LLP in Washington, D.C.

Sachs's research spans a variety of substantive topics, focusing on the history of procedure and private law and its implications for current disputes. His research interests include federal jurisdiction, constitutional interpretation, sovereign immunity, and the legal status of corporations.

He is a member of the Judicial Conference’s Advisory Committee on Appellate Rules, an elected member of the American Law Institute, and an adviser to the ALI’s project on the Restatement of the Law (Third), Conflict of Laws.

In 2020, he received the Federalist Society’s Joseph Story Award, which recognizes a young academic who has demonstrated excellence in legal scholarship, a commitment to teaching, a concern for students, and who has made a significant public impact in a manner that advances the rule of law in a free society.

In June 2013, Sachs wrote an amicus brief to the Supreme Court on forum selection agreements in civil cases. The Court ordered the parties to be prepared to address the brief, which was discussed at oral argument and in the Court's opinion. The brief was later named among the "Exemplary Legal Writing of 2013" by The Green Bag Almanac & Reader, a legal journal.

Sachs clerked for Chief Justice John G. Roberts Jr. during the 2009-2010 Supreme Court term. He clerked for Judge Stephen F. Williams on the U.S. Court of Appeals for the D.C. Circuit in 2007-2008, prior to joining Mayer Brown.

He is a licensed attorney in Massachusetts and the District of Columbia, and he is authorized to practice before the D.C. Circuit, the Seventh Circuit, and the Supreme Court of the United States. 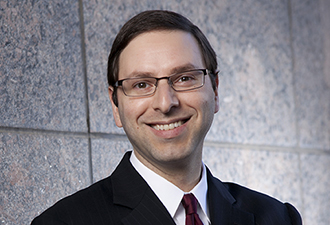