He served as President of the Society for Risk Analysis (SRA) in 2008, and he co-chaired the SRA's World Congress on Risk in Sydney Australia in 2012.  In 2003 he received SRA’s Chauncey Starr Young Risk Analyst Award, and in 2014 he received SRA’s Richard J. Burk Outstanding Service Award.  From 2015-19 he co-directed the Rethinking Regulation program at Duke, and from 2007-15 he directed the JD-LLM Program in International and Comparative Law at Duke Law School.  From 2000-05 he was the founding Faculty Director of the Duke Center for Environmental Solutions, which was then expanded into the Nicholas Institute for Environmental Policy Solutions, for which he served as chair of the faculty advisory committee from 2007-10.

He is a University Fellow of Resources for the Future (RFF); a Public Member of the Administrative Conference of the United States (ACUS); a board member of the Society for Benefit-Cost Analysis (SBCA); and an affiliated faculty member of the environment program at Duke Kunshan University (DKU) and of the Harvard Center for Risk Analysis (HCRA).  He is a member of advisory committees at the NYU Institute for Policy Integrity, the International Risk Governance Council (IRGC), the Chaire Economie du Climat (CEC), and the Cambridge Centre for the Study of Existential Risk (CSER).  He has been a member of the Intergovernmental Panel on Climate Change (IPCC) 5th Assessment Report (Working Group III) (2014), and the study team on “Environmental Risk Management” for the China Council for International Cooperation on Environment and Development (CCICED) (2015).

Before coming to Duke, he served at the White House Council of Economic Advisers (CEA), at the Office of Science and Technology Policy (OSTP), and at the US Department of Justice (DOJ/ENRD), in the first Bush and Clinton administrations. He helped negotiate the Framework Convention on Climate Change, attended the Rio Earth Summit in 1992, and helped draft Executive Order 12866 (1993).  He also helped organize the Americorps National Service program in 1993, the annual City Year servathon in Boston in 1989, and the D.C. Cares servathon in Washington D.C. in 1991; served on the North Carolina State Commission on National and Community Service from 1994-98; and founded the "Dedicated to Durham" community service day held at Duke Law School since 1995.

He clerked for Judge (now U.S. Supreme Court Justice) Stephen G. Breyer on the U.S. Court of Appeals in Boston in 1988-89, and for Chief Judge Jack B. Weinstein on the U.S. District Court in New York in 1987-88. He received his A.B. in economics (1984) and J.D. (1987) from Harvard University, where he was a research assistant at the NBER, assistant coach of the 1985 college debate champions, and an editor of the Harvard Law Review. 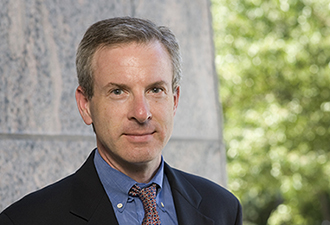