The Mock Trial Board is a student-run organization that promotes the practical development of aspiring trial lawyers at Duke Law through participation in mock trial competitions at both the intra- and inter-scholastic levels. These members represent Duke Law in interscholastic tournaments throughout the country, including the ATLA National Trial Advocacy Tournament, the TYLA National Trial Competition, the Georgetown National White Collar Tournament, and the National Animal Law Closing Argument Competition.

To join the Mock Trial Board, 1Ls and 2Ls must be among the highest-scoring participants in the annual Duke Law Mock Trial Tournament, known as the Twiggs-Beskind Cup. This intrascholastic competition is held annually during the spring semester. During their tenure on the Board, each member is required either to serve as an officer or to compete in an interscholastic tournament each year they are on the Board. The Mock Trial Board is led by an Executive Board composed of a president, vice president, Twiggs-Beskind Cup coordinators, interscholastic competition coordinator, and treasurer. 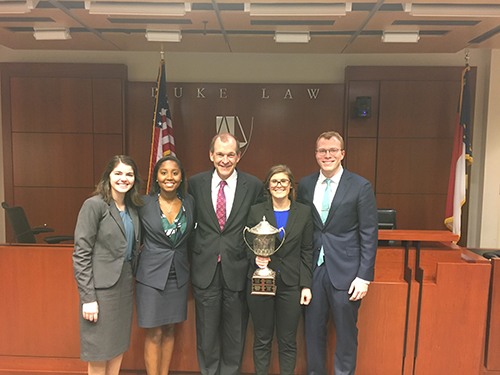 The winners of the 2017 Twiggs-Beskind Cup, presided over by the Honorable Judge James C. Dever III '87, then-Chief Judge of the Eastern District of North Carolina.

Welcome to the Class of 2024. We look forward to meeting you (in person!) come August.