Charles J. Dunlap Jr. joined the Duke Law faculty in July 2010 where he is currently a professor of the practice of law and Executive Director of the Center on Law, Ethics and National Security. His teaching and scholarly writing focus on national security, law of armed conflict, the use of force under international law, civil-military relations, cyberwar, airpower, military justice, and ethical issues related to the practice of national security law.

In the course of his career, Dunlap has been involved in various high-profile interagency and policy matters, including his testimony before the U.S. House of Representatives concerning the Military Commissions Act of 2006.

Dunlap previously served as the senior lawyer (staff judge advocate) at Air Combat Command Headquarters at Langley Air Force Base in Virginia, at Air Education and Training Command Headquarters at Randolph Air Force Base in Texas, and at U.S. Strategic Command, Omaha, Nebraska, among other leadership posts. Additionally, he served on the faculty of the Air Force Judge Advocate General School where he taught various civil and criminal law topics. An experienced trial lawyer, he also spent two years as a military trial judge for a 22-state circuit. He served tours in the United Kingdom and Korea, and deployed for operations in the Middle East and Africa.  He also led military-to-military delegations to Colombia, Uruguay, South Africa, and the Czech Republic.

A prolific author and accomplished public speaker, Dunlap’s commentary on a wide variety of national security topics has been published in leading newspapers and military journals. His 2001 essay written for Harvard University’s Carr Center on “lawfare,” a concept he defines as “the use or misuse of law as a substitute for traditional military means to accomplish an operational objective,” has been highly influential among military scholars and in the broader legal academy.

Dunlap is also the author of the prize-winning essay, “The Origins of the Military Coup of 2012”, originally published in 1992, which was selected for the 40th Anniversary Edition of Parameters (Winter 2010-2011).

He’s also authored numerous articles and opinion pieces in a range of publications including The Atlantic, the New York Times, the Washington Post, the Washington Times, the Air Force Times, Strategic Studies Quarterly, the Georgetown Journal of International Affairs, Business Insider, the Journal of Genocide Research, The Hill, Small Wars Journal, and the blogs, Lawfare and Just Security.

Maj Gen Dunlap founded his blog Lawfire in 2015 and has since written over 300 posts on a wide variety of subjects.

Dunlap's wife, Joy, was a vice president of the National Association of Broadcasters, and later a deputy director of Government Relations for the Military Officers Association of America. She served as the elected president of Duke Campus Club, and is a recipient of the prestigious Order of the Emerald by Kappa Delta sorority. Her blog, Speaking Joyfully, won 3rd place in the blog category at the 2021 Blue Ridge Mountains Christian Writers Conference.  They reside in Durham. 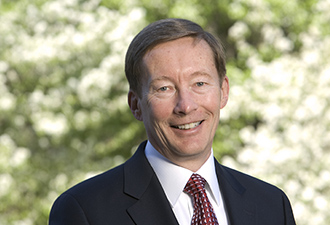 Law 837:  Legal and Policy Aspects of U.S. Civil-Military Relations
The seminar will address the Constitutional and statutory structure of U.S. civil-military relations, as well as contemporary issues relating to the role of the armed forces in policy debates, politics, and social issues.  In addition, it will examine case studies that illustrate the tensions that can arise between the armed forces and the civilian leadership in a variety of circumstances.  Methodologies and approaches for ensuring productive civil-military relations will also be discussed.