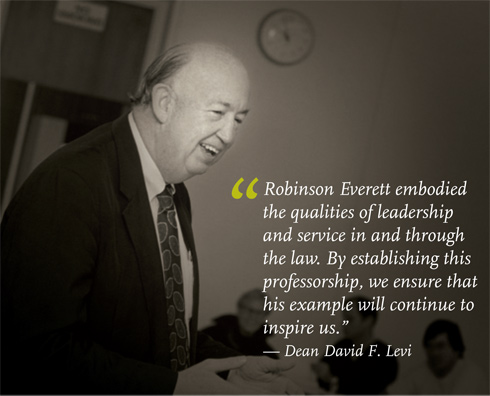 A new endowed professorship honors the late Professor Robinson O. Everett LLM ’59, a revered faculty member who taught at Duke for more than 51 years and inspired thousands of Duke Law students and alumni with his kindness, his service to the law and legal profession, and his devotion to Duke Law School.

To date, more than $2.5 million has been raised to fund the professorship. Leadership gifts were provided by the Kathrine Robinson Everett Charitable Trust, established by Everett’s late mother and longtime law partner, and by David D. Noble ’66. The Duke Endowment’s Strategic Faculty Initiative contributed matching funds of $1.25 million to the chair, which will support a distinguished legal scholar who also will teach classes for Duke University undergraduates. Dozens of other graduates and friends also contributed to the professorship.

A senior judge of the United States Court of Appeals for the Armed Forces and a leading authority on military law and justice, Everett taught classes in military justice, criminal law, sentencing, and criminal procedure. He died in 2009 at the age of 81.

“We are grateful to the many donors and organizations who have helped to make this professorship possible,” said Dean David F. Levi. “Not long before he died, I spoke to Professor Everett about my desire to establish a professorship in his name. He was very pleased by the idea. This professorship will allow us to recruit and attract faculty of the highest caliber, who will carry on the traditions of excellence in teaching and service that Professor Everett modeled so capably and generously. I can think of no better way to honor him.”

It is appropriate, observes longtime colleague William A. Reppy Jr., that the charitable trust named for Everett’s mother, one of the earliest female graduates of the University of North Carolina School of Law, is now a leading donor to the Everett chair.

“As the Duke trustee of the Kathrine Robinson Everett Charitable Trust as well as one who knew Professor Everett’s mother, I am confident that she could not have imagined a more appropriate means of applying trust funds to benefit Duke Law School than the funding of the chair honoring her son Robinson,” said Reppy, the Charles L.B. Lowndes Emeritus Professor of Law. “And as a friend of Robbie’s, I am personally pleased to be part of the process of funding this significant [professorship] to memorialize the late, great friend of Duke Law.”

Donors to the professorship include Everett’s colleagues, friends, and former students. All living past and present deans of Duke Law School contributed to the chair, as did Judith Pye Robinson on behalf of the late Dean A. Kenneth Pye, who was a close friend of Everett’s.

“In the ’60s he was the friendliest and most accessible professor at the Law School,” Noble recalled. “We all liked him so much that we called him ‘Robbie O’ behind his back, but I doubt the name would have offended him. His classes were fascinating and friendly conversations exploring the intricacies of complex subjects. He did not embarrass or humiliate his students as most professors did at that time. He let his boundless curiosity guide each class.

“Long after law school, whenever I found myself before an administrative tribunal, everything I had learned about administrative law came flooding back from the reservoir he had created with his skillful teaching,” Noble said. “When I returned to Durham, I saw Robbie O at virtually every alumni event I attended. His ability to remember names was simply amazing. He took great delight in the careers and families of his former students. He and Duke Law School were inextricably entwined.”

U.S. Army Capt. Sarah Gage ’01 said she “benefited enormously” from having Everett as her 1L small-section professor. “Through his shared wisdom and advice, not only on the law but also on the military, he positively impacted the lives of countless students. His unstinting support of those of us who were in the military as students will not be forgotten.” Gage, who is currently serving in Afghanistan, also contributed to the professorship.

The matching funds from The Duke Endowment’s Strategic Faculty Initiative, established as part of a $40 million gift to Duke University in 2008, advances the Law School’s goal of adding law faculty who will participate in the larger life of the University as well as the Law School.

“The Duke Endowment is proud of its longstanding partnership with Duke Law School,” said Neil Williams ’61, chairman of the Endowment’s board.  “In his Indenture, James B. Duke specifically directed support for the school, and that legacy continues today. It is particularly appropriate to remember Robinson Everett with an endowed chair.  As one of his many former students, I know that in his diverse and remarkably productive career, his Duke Law teaching always ranked high.”

Everett served as chief judge of the U.S. Court of Appeals for the Armed Forces from 1980 to 1990 when he assumed senior status. His work as counsel to a Senate subcommittee in the 1960s facilitated legislation that modernized the U.S. military court system. A Durham native who joined his parents in law practice in 1955 and practiced through most of his academic career, Everett was active in the North Carolina Bar and the American Bar Association, among other professional organizations, as well as business and civic affairs in his hometown. Also involved in redistricting litigation, Everett served as both a plaintiff and lead counsel in challenging the creation of North Carolina’s 12th congressional district. He argued the matter before the U.S. Supreme Court on four occasions, prevailing in a 1996 ruling that found the district was unlawfully created.

With lifelong ties to the Law School — his father was one of Duke’s earliest law graduates — Everett was generous in supporting it philanthropically. In 1993, he founded the Duke Center on Law, Ethics and National Security (LENS) to support and encourage teaching and scholarly research on national security law topics. His philanthropy included establishing the Reuben Oscar and Robinson O. Everett Scholarship Endowment; he also chaired his Law Reunion Committees and served in a leadership capacity on fundraising campaigns.

“Robinson Everett embodied the qualities of leadership and service in and through the law,” said Levi. “He was the model of the citizen-lawyer. By establishing this professorship, we ensure that his example will continue to inspire us.”

As of March 5, 2011, the following donors had contributed to the establishment of the Robinson O. Everett Professorship at Duke Law School. To add your name to the plaque that will recognize those who participated in this gift, please contact: