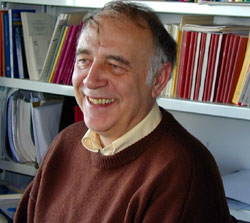 Christian Joerges, a professor at the European University Institute and a well known scholar in subjects including German and international private law and economic law, comparative law, and legal theory, will deliver the second annual Herbert L. Bernstein Memorial Lecture in International and Comparative Law on Sept. 16. The program begins at noon in Room 3043.

The lecture series began in 2002 in recognition of Professor Bernstein, a 17-year veteran of the Law School faculty who died unexpectedly in 2001. A specialist in contract, comparative and private international law, Bernstein previously taught at the University of California at Berkeley, the University of Hamburg in Germany and the University of Southampton in the United Kingdom. He began his work at Duke Law in 1984. The series brings a distinguished comparative and international law scholar to give a public lecture to the Law School community each year.

Joerges has been a full-time professor at the European University Institute since 1998 and formerly was co-director of the Centre for European Law and Politics. His current research and teaching focus on risk regulation at the European and international level, the Europeanisation of private law, compliance problems and anti-liberal traditions of legal thought in Europe. Among his most recent publications are “Good Governance in Europe's Integrated Market” of 2002 and “Darker Legacies of Law in Europe: The Shadow of National Socialism and Fascism over the Conceptualisation of Europe and its Legal Traditions” of 2003.

His lecture will be titled: “The Challenges of Europeanization in the Realm of Private Law: A Plea for a New Legal Discipline.” Duke Law faculty members say Joerges is a leading and innovative scholar in his field.

“Joerges is on the forefront of the debate on the legitimacy of European governance,” said Professor Francesca Bignami. “Through his scholarship, Joerges has reconceptualized the European integration project and has introduced a number of theoretical innovations — innovations which have been extremely influential in both academic and policymaking circles.”

Added Professor Ralf Michaels: “Christian Joerges is one of the most original voices in the actual debates over the future course of the European Union, a development that has been compared to the situation before the foundation of the United States of America. His far-reaching background sets him apart from many specialists in those debates: Joerges bases his research and his opinions on his thorough knowledge of not only European Union law, but also conflict of laws, economic law, legal history, legal theory and sociology of law.”

Joerges, who became a member of the bar in Frankfurt, Germany, in 1972, has held numerous academic positions throughout Europe. To name a few, he has been a lecturer at the University of Frankfurt, co-director of the Centre for European Law and Politics in Bremen, a fellow at the Netherlands Institute for Advanced Study in the Humanities and Social Sciences and a fellow at the Institute for Advanced Study in Berlin. Among other editorial positions, he is co-editor of the European Law Journal.