10:30 a.m.
Ethics and Professionalism in Leadership
Workshop with Bruce Green
CLE session with credits for ethics

Keynote Speaker: Angela Oh
Oh is an attorney, an ordained Zen Buddhist priest of the Rinzai Sect, a public lecturer, and community leader whose public lectures have taken her to China, Korea, the Middle East, Northern Ireland, and the United Kingdom. She is a former partner and trial attorney of the firm Beck DeCorso Barrera & Oh, where she represented individuals and entities in all facets of state and federal court litigation both as an advocate and negotiator. In 1992, Oh gained national prominence for her work for the Asian American community after the civil unrest in Los Angeles. President Clinton appointed her to serve on the seven-member advisory board of the President's Initiative on Race, which was charged with identifying and resolving problems relating to race relations in the United States. Oh specializes in civil rights and criminal litigation and is a prominent member numerous organizations promoting minority rights.

Cait Clarke
Clarke is the Director of Public Interest Law Opportunities at Equal Justice Works. With 18 years experience in teaching, training, and consulting on the law and legal affairs, Clarke has served as the director of Clarke Consulting and as the legal education specialist with Watershed Associates, a Washington, D.C.-based firm specializing in negotiation training. She was also the founding director of the National Defender Leadership Institute at the National Legal Aid & Defender Association, serves on the Board of Directors for the D.C. Campaign to Prevent Teen Pregnancy, and is a founding director of Gardenia House Inc., which provides shelter to migrant women and children. Clarke holds a SJD from Harvard Law School, a LLM from Georgetown University Law Center's Criminal Justice Clinic, a JD from Catholic University's Columbus School of Law, and a BS from Villanova University's School of Commerce and Finance.

Julie Fleming-Brown
Fleming-Brown is executive coach for lawyers through Life at the Bar, an organization she founded that works with attorneys to develop skills necessary to support a successful practice and integrate their professional and personal lives for maximum effectiveness and satisfaction. She is a certified leadership coach (Georgetown University), and a member the International Coaching Federation, the Metro DC chapter of the ICF, and the Georgia Coaches Association. Fleming-Brown graduated from Emory Law School and after working in patent litigation at Jones Day, she is currently of counsel with the Atlanta law firm Keegan Federal & Associates, where she focuses primarily on complex business litigation. She is a fellow of the American Bar Foundation, and is actively involved with the ABA Section of Science and Technology Law, for which she currently serves as editor-in-chief of the quarterly periodical, The SciTech Lawyer.

Bruce Green
Green is the Louis Stein Professor and the director of the Louis Stein Center for Law and Ethics at Fordham University School of Law. He teaches courses in the areas of legal ethics, criminal law, and criminal procedure and shares responsibility for overseeing the law school's Stein Scholars Program, which assists selected students interested in careers in public interest law or public service. Green's expertise in the area of leadership and ethics is extensive; he has been widely published in the subject, organized national conferences on issues of ethics and public interest law, contributed to several amicus briefs to the U.S. Supreme Court, assisted the Fordham Law Review in publishing its annual special ethics book, and served as the chair of ethics committees for the ABA and the New York State Bar Associations.

Jay Moyer '65
Moyer joined the National Football League in 1972 as Counsel to the Commissioner and in 1984, was named Executive Vice President and League Counsel, then the NFL's number two executive position. Since retiring from full-time work in December 1996, he has served as Special Counsel to the NFL, primarily in the area of dispute resolution, and as Adjunct Professor at Fordham Law School. He is a director of the Sports Lawyers Association and several other non-profit organizations. Prior to joining the NFL, Moyer practiced litigation and labor law with Squire, Sanders & Dempsey in Cleveland, Ohio. He graduated with high honors from Dartmouth College and Duke Law School, and was elected to Phi Beta Kappa and the Order of the Coif. He has been profiled in multiple editions of Who's Who in American Law, Who's Who of Emerging Leaders, and Who's Who in the World.

Kevin Smith
Kevin Smith is the Scholarly Communications Officer at Duke University; he works out of the main University library and is available as a resource to the University faculty, staff, administration and students for advice on a wide variety of copyright, publishing, and licensing issues. Kevin began his academic career with graduate studies in theology at Yale University and the University of Chicago, and then decided to move into library work. His strong interest in copyright law began in library school and persisted throughout his work in both theological and liberal arts college libraries. He received a law degree while serving as the director of the library at Defiance College in Ohio and moved to Duke shortly thereafter.

Kevin serves on the faculty of the Association of Research Libraries' Institute on Scholarly Communications and on the American Library Association's Committee on Legislation Subcommittee on Intellectual Property. He maintains a highly-regarded web log on scholarly communications (http://library.duke.edu/blogs/scholcomm/) that discusses copyright and publication in academia and he is a frequent speaker on those topics. 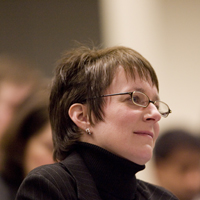 Participants at the 2007 Leadership Experience listen to panelists.