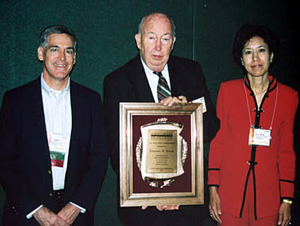 Duke Law Professor Robinson Everett is the 28 th recipient of the prestigious Judge John J. Parker Memorial Award, the highest honor bestowed by the North Carolina Bar Association (NCBA) upon its most distinguished members. The Parker Award is given by the Board of Governors of the NCBA in recognition of the memory and accomplishments of the late Judge John Johnston Parker (1885-1958), a former Chief Judge of the United States Court of Appeals for the Fourth Circuit and a long-time contributor to the cause of jurisprudence in North Carolina.

Attorney J. Norfleet Pruden III presented Professor Everett with the award at the NCBA’s annual meeting in Asheville, N.C. on Saturday, June 19. The following is a transcript of his remarks.

The Judge John J. Parker Memorial Award is the highest award conferred by this Association.

Established to honor Judge Parker shortly after his death in 1958, it is intended to encourage the emulation of his deep devotion and enduring contribution to the law and to the administration of justice, and to recognize conspicuous service by others in the cause of jurisprudence in this, his native State. 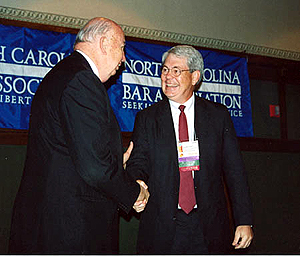 The Parker Award is not given every year, so when it IS given, it’s a special occasion. Special efforts are made to keep the name of the recipient a secret, even from the recipient, until his or her name is announced at this meeting.

My partner and fellow Past President, Ace Walker, has suggested that the acid test for the Parker Award should be whether, when the name of the recipient is announced, the first reaction of our bar is, “Oh, but of course!”

Among the papers at your seats is a sheet listing all of the prior recipients of the Parker Award. I think you will recognize the names of many if not all of them, and I think you will agree that they meet not only the standard of conspicuous service in the cause of jurisprudence, but also the Ace Walker test of “Oh, but of course.”

Our honoree this morning ought to feel right at home with the great lawyers on that list, because he has done or been ALL those things, in many cases at the same time.

And while he has done all these things, he has also been a successful businessman, a devoted son, husband and father, a good friend to many, and a stranger to no one who has had the good fortune to shake his big hand or feel the warmth of his big smile.

I see light bulbs of recognition going on above your heads all over the room.

But before I name our honoree and ask him to come forward and receive this award, let me provide a few details about him.

Our honoree was born in Durham, the son of two distinguished members of the Durham Bar.

Then he returned to Durham and became an assistant professor at Duke Law School at age 22. He still holds the record as the youngest faculty member in the Duke Law School’s history.

Not long thereafter, though, the Korean War heated up, and our honoree joined the Air Force, where he was assigned to the Judge Advocate General’s Corps.

Thus began an illustrious connection between our honoree and the military that led to our honoree’s becoming one of the country’s foremost authorities on Military Law — and also becoming an officer in the Air Force Reserve, from which he retired as a Colonel.

And it also led, ultimately, to his appointment by President Carter to the United States Court for Military Appeals (now the U.S. Court of Appeals for the Armed Forces), on which he served as Chief Judge for more than a decade. He is now a Senior Judge of that Court.

Upon completing his active duty in the Air Force, he returned home to Durham and joined his parents’ law firm, adding his name to the letterhead — although he would jokingly refer to the name of the firm as “Mother, Dad and Me.”

In 1956, he rejoined the Duke Law faculty, and has taught there continuously ever since — writing and teaching not only about the most arcane topics of military and national defense law, but also the basic principles of criminal procedure and evidence. In addition to teaching, he also founded the Center on Law, Ethics, and National Security at the Law School.

In his spare time in the early and mid ‘60s, our honoree served as counsel and then later consultant to Senator Sam Ervin’s Judiciary Subcommittee on Constitutional Rights. His work during this period helped lead to enactment of the Military Justice Act of 1968.

Our honoree has been a longtime contributor to and leader in the organized bar. In our state he has, among other things, served as President of the Durham County Bar, a member of the State Bar Council, Chairman of the IOLTA Board, Chairman of the CLE Board, and Chairman of LAMP, the Standing Committee on Legal Assistance to Military Personnel.

He has been an active contributor to and participant in the life of THIS Association, and served as Vice President of this Association several years ago. I think one of the most memorable hours in the history of our Bar Convention (other than, perhaps, this one) was the one a few years ago in which our honoree and another recipient of the Parker Award, Julius Chambers, debated the issues involved in the redistricting case pending at the time.

At the national level, our honoree has served on numerous committees and task forces of the American Bar Association and the Federal Bar Association, including service as chair of the ABA’s Standing Committee on Military Law. He is a life member of the American Law Institute and of the National Conference of Commissioners on Uniform State Laws. He has received high awards for his service from both the ABA and the Federal Bar Association, and not only has he WON the Judge Advocates Association’s life service award, they named the award after him.

And now I want to call our honoree forward to receive OUR Association’s highest award. I’m not sure whether to call him Judge, or Professor, or Colonel, or Counselor, or — with no less respect — simply Robbie.

By now I’m pretty sure HE knows who I’m talking about and that I’m talking about HIM. In case any of YOU haven’t figured it out yet, then let me just say that it is my privilege, on behalf of the North Carolina Bar Association, to present the Judge John J. Parker Memorial Award to -- oh, but of course — Robinson O. Everett.