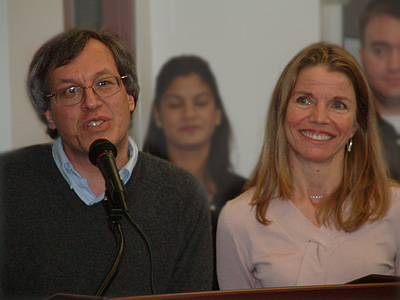 “Erwin Chemerinsky is one-of-a-kind, and exactly the kind Duke Law School wants: a first-rate constitutional law scholar, extraordinary teacher, highly-visible public intellectual and a serious lawyer who finds time to advance the legal reforms about which he is most passionate,” said Katharine T. Bartlett, Dean and A. Kenneth Pye Professor of Law. “At Duke, we look for faculty who are both top scholars and real lawyers who can teach and serve as excellent role models for the lawyers we train. Erwin is all of these things, big-time. Catherine Fisk is also at the top of her game — an emerging leader in the complex field of employment law, a wonderful teacher and a great colleague. We cannot wait to have them both on board at Duke Law School.”

Chemerinsky is currently the Sidney M. Irmas Professor of Public Interest Law at the University of Southern California, where he teaches courses in constitutional law and court procedure both in the Law School and for undergraduates. A graduate of Northwestern University and Harvard Law School, he joined the USC faculty in 1983. He has received many honors for his teaching including the "best teaching awards" from DePaul University in 1983 and from USC Law School in 1984 and 1991. He also has been given awards by the Asian Pacific Law Students at USC in 1996 and the Black Law Students Association in 1997. In 2000, Chemerinsky was named by California Law and Business as one of the 10 most influential lawyers in California.

"Teaching, in the classroom and outside of it, remains my greatest professional joy," said Chemerinsky, who is married to Fisk. "Catherine and I enjoyed such a wonderful experience at Duke as visiting professors in fall 2002, we couldn't be happier about coming back.”

Fisk, also a law professor at USC, teaches courses in employment and labor law and civil procedure. A graduate of Princeton University and Boalt Hall at the University of California at Berkeley, she was previously a professor and the William M. Rains Fellow at Loyola Law School. Prior to her academic career, Fisk practiced law with a boutique Washington, D.C., firm, was an appellate lawyer at the U.S. Department of Justice, and clerked for 9th U.S. Circuit Court Judge William A. Norris. She is a member of the Labor Law Group and the AFL-CIO Lawyers' Coordinating Committee and a vice president of the American Civil Liberties Union of Southern California. She also occasionally serves as a labor arbitrator.

"In all of my work, I try to be aware of the many ways that legal rules affect, and sometimes fail to affect, human lives," Fisk said. "I believe that teachers and lawyers are uniquely well-situated to make a positive difference while also having a rich intellectual life. I want to do that and to inspire my students to do so too."

Chemerinsky also regularly teaches in programs for state and federal judges throughout the country. He is the author of four books, over 100 law review articles, and hundreds of essays in newspapers and magazines. He writes a regular column on the Supreme Court for Trial Magazine , California Lawyer , and the Daily Journal . Additionally, he regularly serves as a commentator for the media on legal issues, including serving as a legal consultant to CBS News, and other media, during the O.J. Simpson case.