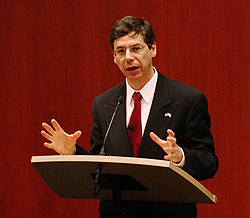 Speaking at Duke Law School on March 7, Israel’s ambassador to the United States, the Honorable Daniel Ayalon, said that Israel seeks peace with all its neighbors. He went on to describe peace as more than just a strategic option.

“For us as Jewish people, and for Israel as a country and a democracy, peace is … a moral obligation. And we are willing to do a lot to make peace–to offer great concessions.” Offering the lasting peace agreements Israel has made with Egypt and Jordan by way of example, Ayalon said Israel would be willing “to take the risks and [make] the peace when we know we have a partner whom we can trust–a partner which is trustworthy, committed to peace, and also willing to make concessions.”

A participant in the Sharem El Sheik, Wye Plantation, and Camp David peace summits, Ayalon expressed cautious optimism that Israel has such a partner in Mahmoud Abbas, who was recently elected president of the Palestinian Authority.

“[He] won a free and fair election … and called for the end of violence. We hope that he will be followed by his people, we hope that he will have enough power to restructure his own police forces, his own economy, [and] his own political structure, so we can move ahead.” Israel’s proposed disengagement would include a withdrawal from the Gaza Strip and a substantial portion of the West Bank. Ayalon was clear, however, in pointing out that peace depends on an end to “Palestinian terror.”

“What we ask from the Palestinians is to make a sustainable effort against terrorists. It isn’t enough to deploy their troops. They have to be proactive in going after the terrorists, in casting a wide net of investigations, arrests, and interrogations.”

Ayalon observed that 1,000 Israelis died in terrorist attacks in the past four years, the proportional equivalent for a country of 6.5 million to the loss of 50,000 American lives. He laid the blame for the bloodshed squarely on Abbas’s predecessor, Yasser Arafat.

“It was a top-down campaign of terrorism which was initiated, instigated, planned, and carried out by Arafat, whose legacy of bloodshed, terrorism, and missed opportunities was un-matched.”

Even if Abbas succeeds in quelling attacks from Palestinian territory, Ayalon pointed to ongoing threats from Iran and Syria, working through “their proxy,” Hezbollah.

“Just as we are beginning to see some traction between us and the Palestinians, they are trying everything to derail the process and to derail the possibility of other progress.”

Ayalon blamed “Islamic Jihad,” an organization headquartered in Damascus, for last month’s bombing outside a Tel Aviv nightclub, which killed five Israelis. He also called a nuclear Iran a danger to the entire region that must be stopped, ideally through the efforts of a unified international community, and UN-imposed monitoring and sanctions.

“With political isolation, and with the threat of economic sanctions, I think the Iranians will be much more careful,” said Ayalon. “Iranians are very sensitive and attuned to the international community.”

While repeated terrorist attacks can “wreak havoc on a country, on an economy and can really create a meltdown of democratic institutions,” Ayalon noted that Israelis came together in the past four years.

“The real heroes of the campaign of terror against us were the Israeli fathers and mothers who kept sending their children to school. By just showing up to work, by going to the markets, going out to the movie theaters, that was a great defiance to terrorism.”

Returning to the prospects for peace with the Palestinians, Ayalon reiterated Israel’s willingness to release prisoners and retreat from Palestinian cities.

“The moment [the Palestinian Authority] can assume responsibility, we don’t want to be in their cities. We feel that ultimately they can do a much better job than us in fighting the terror, because it is their own people–people who live in their midst.

“I think [our] departure from Gaza also should lend itself in a positive way for the Palestinians to take control, and they can show us, and the entire world that they are responsible parties. They will be free and sovereign to do whatever they can. The international community can help with a massive inflow of cash, but basically, they will have to gain control, so there is one authority there, one roadblock, and ‘one gun’–one security force.”

Responding to a question from the audience, Ayalon cautioned against “rushing forward” with a comprehensive peace plan, as was done in the failed Oslo process.

“I don’t think that if we now frontload the core issues of the permanent status, the peace will properly be served. There is a win-win situation in moving forward whereby the Palestinians can gain sovereignty [and] gain a state for the first time in history. In the roadmap for peace, the overriding principle is performance. It is a win-win, where Palestinians can gain full sovereignty over their population with dignity, with economic benefits, and you still have some issues that will have to be [negotiated].”

Ambassador Ayalon’s visit to Duke Law School was sponsored by the Program in Public Law. A webcast of his address will be available shortly at http://www.law.duke.edu/webcast.