Meeting the Threat: A Symposium on Counter-Terrorism 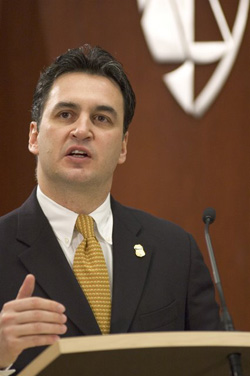 Duke Law School hosted a prominent and experienced group of counter-terrorism experts on Friday, February 4 for “Meeting the Threat: A Symposium on Counter-Terrorism.” Government officials at the highest level of the Department of Homeland Security, investigators, prosecutors, and a federal judge took part in a day of panel discussions on what is being done to keep America safe from terrorists, and how terrorism cases are investigated and prosecuted. The symposium was well attended by members of the community and local, state, and federal law enforcement agencies.

“Meeting the Threat” was sponsored by the Program in Public Law, and initiated and organized by Tyler J. Friedman ‘06, who has a long-standing interest in national security and counter-terrorism; prior to enrolling at Duke Law School, he worked as a paralegal in the office of the U.S. Attorney for the Southern District of New York, the legal epicenter for many of the terrorism-related prosecutions in the United States leading up to 9/11.

Michael J. Garcia, Assistant Secretary for Immigration and Customs Enforcement (ICE) in the Department of Homeland Security, delivered the keynote address. Prior to his appointment to that post in March 2003, Garcia served as Acting Commissioner of the Immigration and Naturalization Service, and from 1992-2001, was a federal prosecutor in the Southern District of New York, successfully prosecuting the 1993 World Trade Center bombing, the 1995 “terror in the sky” conspiracy involving a plot to blow up U.S. airliners in southeast Asia, and the 1998 bombings of the U.S. embassies in Kenya and Tanzania. Garcia shared lessons learned from those prosecutions, as well as an overview of counter-terrorism practices at the center of ICE operations.

On September 1, 1992 , recalled Garcia, Ramzi Yousef, the mastermind of the first World Trade Center bombing, as well as the “terror in the sky” plot, arrived in the United States , along with a co-conspirator. Both used false passports and were briefly detained, and one was found to have a number of false identity papers as well as a bomb-making manual, but they were eventually released under the protocols of the day.

In prosecuting the first World Trade Center bombing, prosecutors “charged every crime available,” said Garcia, including those prohibiting damage to government property and property used in international commerce–the World Trade Center–travel and Immigration Act violations; almost all the bombers had committed some form of immigration violation, including passport and asylum fraud, violation of student visas, and even “special agricultural worker fraud,” which led to one conviction.

The trials arising from the 1995 airline plot and the embassy bombings broke new ground in prosecutions, because there were no U.S. crime scenes, and all fact witnesses had to be brought to New York from overseas. In the latter case, he pointed out, there were novel issues of statements made in other countries–the confession of the individual who drove the bomb into the embassy was almost suppressed because the defendant had not been read his Miranda rights, rights that did not in fact exist in Kenya , where he was apprehended.

These cases led to changes in laws, and the development of close relationships between investigators and prosecutors, and strategies to protect classified intelligence information from disclosure.

Turning to ICE, Garcia described how the agency targets unlicensed money brokers under the USA PATRIOT Act and uses export control laws with a view to keeping weapons and sensitive technology out of the hands of terrorists. By targeting alien smugglers and their financial assets, officials seek to address vulnerability in U.S. border security, he continued, outlining a compliance enforcement program aimed at ensuring that visitors, tourists and students comply with the terms of their entry documents into the country.

“We are trying to take a comprehensive approach to the fight against international terrorism. [Now] balances are being struck in favor of national security in a way far different than the approach used to make the decisions to release Ramzi Yousef into the United States [in 1992].”

Admiral David M. Stone, Assistant Secretary of Homeland Security for the Transportation Security Administration (TSA) since July 2004, outlined security efforts in areas he oversees, including aviation, mass transit, rail, highways, pipelines and maritime security, the last in partnership with the Coast Guard. He emphasized a need to focus not just on security “for security's sake,” but the security that is actually needed to protect a particular mode of transport based on an accurate assessment of risk.

“We look at the threat–the intelligence–we look at the vulnerability of the assets, and we look at criticality–how important they are, [if damage was done to them] how would that impact on the security of transportation in this country? And then we take those three ingredients, threat, vulnerability, and criticality, and we make a risk-based decision, and that is a roadmap of how we're going to secure the U.S. transportation system.” Specific “modal” plans for each transportation sector will be submitted to stakeholders in those areas shortly.

The bulk of the symposium involved discussions of how terrorism-related cases are investigated, prosecuted, and tried, and how effective these efforts are. Current and former prosecutors outlined the various statues they rely on to investigate and prosecute actual terrorists, their direct supporters, and those who are prosecuted for non-terrorism crimes. “Material support” statutes that can be used to investigate acts of terrorism, and to inquire into material witnesses, and disrupt the flow of money to terrorists were explored in depth.

Former federal prosecutor Geoffrey S. Mearns, who prosecuted Oklahoma City bomber Terry Nichols and coordinated the investigations of the Montana Freemen–both “domestic” terrorism cases–urged law enforcement officials to question whether abandoning or compromising a commitment to certain due process principles leads to neutralizing the threat posed by international terrorism, or fuels it. He also questioned the reliability of statements that result from coercive interrogation techniques, and stressed the need to focus on the qualitative aspects of intelligence gathering, as opposed to just quantity.

“In 2000, there were just over 1,000 applications for electronic surveillance to the [Foreign Intelligence Surveillance Act, or] FISA Court , but in 2003 that number jumped to over 1,700. But one of the principle problems [the 9/11 Commission] identified was not the lack of volume of information to law enforcement; it was, rather, the quality of the information law enforcement had, and their ability, that is the number of people available to analyze the data.

“It's important to ask whether we're using techniques that will truly help us win this war on terrorism.”

Gerald E. Rosen, U.S. District Judge for the Eastern District of Michigan, who presided over the first terrorism prosecution that followed September 11, listed key questions facing the courts: “Will the war on terrorism change the constitutional protections that we depend upon in the courts to safeguard our civil liberties? Will it change or ultimately impinge upon judicial independence … or will we continue to exercise institutional independence, and not simply be a rubber stamp for the executive and legislative branches? We're seeing this now played out in the courts.

How much access defendants should be given to classified information is an enormously challenging question for judges, Rosen continued. “Defendants have absolute rights to this information as part of their confrontation rights. It's a very hard balancing act–defendants' rights with the very real national security interests of the government.”

Andrew McCarthy, who worked on some of the major pre-9/11 terrorism cases over ten years as an Assistant U.S. Attorney for the Southern District of New York, offered the view that neither the criminal justice system nor the military justice system are ideal for prosecuting international terrorists. He called the early terrorism prosecutions inefficient, despite being “models of due process;” while al-Qaeda grew exponentially during the 1990s, eight U.S. trials in the 1990s “neutralized” just 29 terrorists. He cited evidentiary burdens, which can require compromising classified information, as well as the fact that courts, prisons, and court personnel all need to be secured, as hurdles to efficient prosecutions. And in the national security context, he argued, defendants should not have the full panoply of rights afforded to criminal defendants.

“We can't afford to have the government lose.”

McCarthy, now Senior Fellow at the Foundation for the Defense of Democracies, advocated a “third way” to handle terrorism prosecutions, one that might see the FISA court expanded and have jurisdiction over actual criminal offenses, “so it would be a single court with a single standard that would have expertise in the matters of national security we deal with. Then I'd like to see a thoroughgoing discussion of the Classified Information Procedures Act, and what trials would actually look like. There's a lot of discussion that needs to take place about how discovery might be “clipped” so that we have a process that meets due process standards so that it's fair, but we're not giving away the store to the enemy during a war.”