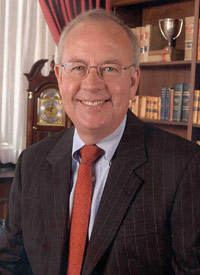 Dean Kenneth W. Starr of Pepperdine University School of Law will speak on his experiences at the intersection of law and politics on Oct. 2 during a lunchtime address at Duke Law School.

The event, in Room 3041, is free and open to the public, and begins at 12:15 p.m. The Law School is located at the corner of Towerview Road and Science Drive on Duke's West Campus.

A graduate of Duke Law School, Dean Starr has served as a federal judge on the D.C. Circuit of Appeals (1983-89), as United States solicitor general (1989-93), and as Whitewater independent counsel. The report of his investigation of President Clinton and his relationship with Monica Lewinsky ultimately led to the president's impeachment by the House of Representatives.

Dean Starr's address is the latest in the student-organized "Practical Politics and the Law" series, which offers students insight into the political process from bipartisan perspectives. Previous speakers include former Democratic congressional candidate and Iraq war veteran Paul Hackett, Republican political lawyer and strategist Ben Ginsberg, and former Democratic National Committee Chairman Joe Andrew. The series is sponsored by the Program in Public Law and Duke Journal of Constitutional Law and Public Policy.

A live webcast of Dean Starr's address will be available at
http://www.law.duke.edu/webcast/