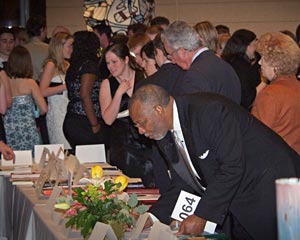 The 10th annual Public Interest Law Foundation (PILF) Auction & Gala raised a record $66,000 in support of summer public interest fellowships on February 25. Held at Duke's Nasher Museum of Art, the event was both spectacular and successful, attended by more than 500 people who enjoyed art, cocktails, and a performance by student singers "Speak of the Devil" during the silent auction. The evening concluded with a 35-item live auction, amusingly emceed by Garrett Levin '06 and auctioneer Joe Pope, which featured items ranging from vacations in Maui and Southwestern France to tickets to "Oprah" and the World Series.

PILF co-chair Teresa Sakash '06 was quick to praise Auction Chairs Julia Kohen and Leah Nicholls and Auction Manager Melissa Oliver, all 2Ls. "Through their individual and collective creativity and dedication, these three redefined what a successful PILF Auction & Gala entails, elevating the event to previously unimagined heights," said Sakash. She also offered special thanks to auction donors and its sponsor, Lowndes, Drosdick, Doster, Kantor & Reed, P.A., as well as the platinum ($3000+), gold ($1500) and Silver ($750) sponsors listed at http://www.law.duke.edu/student/act/pilf/Auction2006/Auction_Sponsors.html.

"Every year, the students learn how to make the gala bigger and better," said Associate Dean of Public Interest and Pro Bono Carol Spruill. "It is not only the best social event of the year, but it produces money that funds students to work with lawyers in underfunded legal aid, public defender, and other community and government organizations. The students serve the public and in the process have what is often a transformative experience affecting the rest of their legal careers."

The PILF Auction & Gala capped the Law School’s first Parents' Weekend, a student-organized event overseen by PILF Co-chair Zach McNish '06. More than 115 parents attended classes, toured the School and Duke campus, and took in the finals of the Dean's Cup Moot Court Competition. "The thoughtfulness of the organizers was apparent throughout the event, from the warmth of the welcome parents received to the forethought involved in setting up overflow rooms for the Moot Court competition," said Anita Farel, whose daughter, Lily, is a 3L.