<em>The Shakespeare Chronicles:</em> Inspired by his defense of the Bard in court, Professor James Boyle pens a literary thriller

Nineteen years ago, and 370 years after his death, William Shakespeare was on trial for literary fraud in front of three Supreme Court Justices. The trial, of course, was not real, but it was public. Before a panel made up of Justices William H. Brennan, Jr., Harry A. Blackmun, and John Paul Stevens, 900 observers in a Washington, D.C. church, and a national television audience, James Boyle, now the William Neal Reynolds Professor of Law at Duke, successfully argued that Shakespeare, not Edward de Vere, the 17th Earl of Oxford, was the true author of the Shakespearean canon. The mock trial was covered on the front-page of The New York Times and sparked a New Yorker feature article. Boyle says he received mail from Shakespearean “sleuths” for years afterward.

It was this extraordinary level of interest in the event, as well as the nature of the conspiracy theories he unearthed in preparing his brief — and the vehemence with which they were put forth by their proponents — that inspired Boyle to write his most recent book, a departure from the intellectual property law scholarship for which he is best known. The Shakespeare Chronicle: A Novel, is a literary mystery about one man’s obsessive search for the true author of Shakespeare’s works. 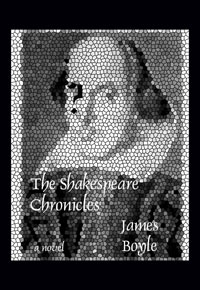 The Shakespeare Chronicles jumps between Elizabethan England and a contemporary love affair, following English Professor, Stanley Quandary on his quest for the real Shakespeare. Quandary’s interest is sparked by a bizarrely detailed series of historical dreams. His growing obsession leads him to travel to Britain to find the truth his research suggests -- in Shakespeare’s tomb if necessary.

Between Elizabethan conspiracies and contemporary conflicts, the book has its share of drama. There are murders, cover-ups, and illicit love affairs, as well as plagiarism, arson and professional disgrace. “It sounds like the mid-term elections, doesn’t it?” Boyle says happily, but his real interest is in the motivations behind both Shakespearean defenders, and the “heretics” — the name proudly worn by those who do not believe William from Stratford was the true author. “On the heretical side, there is a real sense that this is a wrong that needs to be vindicated — that Shakespeare was either a front man who was never supposed to keep the credit, or a necessary illusion supposed to be uncovered in time — that the true author was compelled for some reason to conceal his identity during his lifetime, but left clues for the truth eventually to emerge.”

Boyle’s research revealed a cast of 56 historical characters named as possible authors, from courtier de Vere, to Elizabethan-era dramatist and possible secret agent Christopher Marlowe, to Montaigne, Bacon, and evenQueen Elizabeth herself. Some noted thinkers have been heretics — Sigmund Freud, Henry James, for example. In fact, two of the Justices before whom Boyle argued — Stevens and Blackmun — later expressed skepticism about Shakespeare’s authorship. “It appears that my arguments had a short half-life” he observes.

Boyle found Elizabethan drama to be fascinating. “This was a mass art form — more akin to CSI or Monk than to Wagner’s Ring Cycle. Or maybe what is interesting about it is that it was both CSI and The Ring Cycle. The playwrights had to appeal to a highbrow audience, but also to ‘the groundlings.’ The way they layered meanings into their work to appeal to both audiences simultaneously is intriguing to a lawyer, but it is also the kind of writing that naturally gives rise to claims of hidden messages and coded conspiracies.”

Some of those conspiracies were real. Playwrights sometimes acted as “mouthpieces” for clashing factions in Elizabethan society, Boyle points out. “Plays were an effective way to reach public opinion, and so the stakes were high in working out their hidden meanings. Was Julius Caesar a covert condemnation of royal power? Was Coriolanus a politically motivated attack on the idea of popular government?” So, Boyle says, it is not surprising for the heretics to suggest another layer of conspiracy -- that perhaps the authorship of the plays has been hidden precisely so the real playwright can say things he otherwise could not.

Fundamentally the search is for meaning — the meaning of the plays, Boyle says. “Shakespeare’s plays are so important to us, the Sonnets so important — we use lines or concepts from them without even realizing it. But what do they mean? Is Hamlet a Freudian fable, do the Sonnets reveal that Shakespeare was in love with another man? If we knew just a little more about the person who wrote them, we think we might know the answers. For me, it is strongly reminiscent of the search for the true original intent of the Framers of the Constitution. And just as futile” he adds pointedly — proving that this novelistic enterprise has not rid him of the desire to get a scholarly jab in now and again.

A prolific scholar whose collected works include Shamans, Software and Spleens, numerous journal articles, and Bound by Law?, a legal comic book about the interface of copyright and documentary film. Boyle also contributes regular columns to the Financial Times Online. Boyle spent many years crafting The Shakespeare Chronicles. “It was something I kept coming back to. The stories are so good, the conspiracies and intrigues so labyrinthine that I really felt it needed a novel, rather than a history book.” Did Shakespeare really write Shakespeare? Boyle says we will have to read the book to find out.

The Shakespeare Chronicles is available in hardcover, paperback, and as an E-Book. Ordering details and a sample chapter can be found at the book’s Web site, http://www.shakespearechronicles.com.