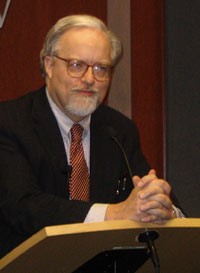 Carl Schneider, Chauncey Stillman Professor for Ethics, Morality, and the Practice of Law

Carl Schneider, Chauncy Stillman Professor for Ethics, Morality, and the Practice of Law and a professor of internal medicine at the University of Michigan, delivered the sixth annual Rabbi Seymour Siegel Memorial Lecture in Ethics on November 14, arguing that the doctrine of informed consent — the dominant doctrine related to medicine — is a failure.

“Informed consent does not and cannot put patients in a situation in which they can make informed medical decisions for themselves,” said Schneider, referring to numerous studies supporting his position. “Informed consent has consistently failed in achieving the purpose for which it was introduced and it is doomed always to fail, no matter what we do.”

Doctors and patients are “begrudging teachers and learners, at best,” said Schneider, counting this as one reason for its failure. Physicians know they can strongly influence the choices their patients make by the way they frame the alternatives, and know how hard it is to “bring patients up to speed” on treatment options, and find it difficult to frame information in simple, clear language. For their part, he said, patients may request detailed information about their conditions and treatments, but don’t — or can’t — fully assimilate the information (and irrelevancies) presented to them. In many cases, the sheer volume of information overwhelms patients, as is the case, he said, with the informational requirements of many independent review boards (IRBs) for enrolling patients in clinical studies.

“IRBs are increasingly insisting on extensive disclosure of every conceivable risk. We are giving patients 25-page documents. They don’t even take the task on.”  A better approach, he suggested, might be for IRBs to simply disallow obviously dangerous research — or monitor it extremely closely — “and then free up the rest of the research from the obligation of having patients read 25-page documents that you know they won’t.”

Mandatory disclosure “never seems to work the way it’s supposed to,” said Schneider, pointing to its common use in securities trading, truth in lending, and reading criminal suspects their “Miranda” rights, and it apparently never works with consumers. “If you look at the extent to which consumers go out and try to acquire information about the decisions they are making, like retirement planning, you discover that people, in very large numbers, do not take the most basic steps and do not know the most basic things.”

Patients he has interviewed have consistently told him that they want, above all, competent and caring doctors. “‘I want a doctor who cares whether I live or die.’ Far too often, patients feel that they get neither,” he said. “The patient does not think that because she is asked to sign one more form her human dignity is better off. On the contrary, if anything, it seems to me that informed consent is so easily satisfied by having the doctor hand the patient a form that it reduces the essential respect for human dignity that we ought to be interested in.

“When we think about how to use our reformist energies — the energies of law and the energies of ethics — when we think about what might most promote human autonomy and human dignity, I think that it’s time for us to abandon more and more attempts to tweak informed consent and begin to think much more basically about what we need to do to make the relations between doctors and patients work better, and to make the way that patients are treated by managed care organizations and by hospitals more successful and more decent.

The annual Siegel Lecture is sponsored by labor lawyer and Senior Lecturing Fellow Allen Siegel ’60 to honor the memory of his brother, Rabbi Seymour Siegel, a noted scholar of ethics and theology, who died in 1988.