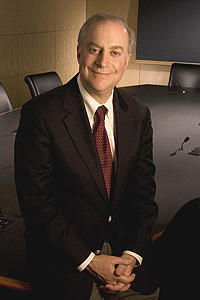 David F. Levi, Chief U.S. District Judge of the Eastern District of California and a national leader in legal reform and civil procedure, has been selected as the next dean of Duke Law School, Duke University Provost Peter Lange announced Wednesday.

If approved by the university’s Board of Trustees later this month, Levi, 55, will succeed Katharine T. Bartlett on July 1, 2007. Bartlett announced her plans last spring to step down at the end of the school year to return to teaching and scholarship after seven years as dean.

Citing Levi’s leadership as chair of the Judicial Conference Committee on Rules of Practice and Procedure and his service on numerous legal rules and oversight panels, Lange described Levi as “a leader with broad intellectual interests and a thoughtful, academic temperament.” He said Levi was universally praised during the search process for his wisdom and judgment, his substantial administrative experience -- the Eastern District has the highest weighted caseload per federal judge in the nation -- and his deep understanding of and connections within the legal community.

“Judge Levi brings to the deanship an outstanding record of accomplishment in the legal community,” Lange said. “President (Richard H.) Brodhead and I were impressed by his deep knowledge of the profession and strong commitment to the promotion of legal scholarship and the training of law students. He will serve the university well in enhancing the distinctive identity of Duke Law School as a place that recognizes the importance of aligning the highest standards of academic scholarship with a real commitment to addressing challenges within the profession and making law school relevant to the changing world of legal practice.”

Levi noted “the exceptional momentum” of Duke Law School as a critical factor in his decision to leave the federal bench.

“Leaving the federal bench is a career choice of some magnitude, one I would not have considered unless I was convinced of the exceptional momentum of Duke Law School,” Levi said. “It is a privilege to join a law school of the first rank that is imbued with a sense of optimism and purpose, within a university that places an emphasis on knowledge in the service of society. I look forward to helping to strengthen an already distinguished law school faculty and student body and to deepen Duke Law School’s ties to the profession and to those persons and institutions who work to improve our legal system and to uphold the rule of law.

“I am eager to work with my faculty colleagues, with Duke law students and alumni and with Provost Lange and President Brodhead to continue the momentum of the Duke Law School, which has been so ably led by Dean Bartlett,” he continued. “This will require outstanding scholarship, a deep engagement with the profession of law, the hiring of more top-notch faculty, a commitment to diversity of both our students and faculty, and making the most of collaborative opportunities both within Duke and internationally.”

Following graduation from Stanford Law School in 1980, Levi clerked for Judge Ben C. Duniway of the Ninth Circuit Court of Appeals and then for U. S. Supreme Court Associate Justice Lewis F. Powell. He joined the U.S. Attorney’s Office for the Eastern District of California as a prosecutor in 1983 and was appointed U.S. Attorney for the Eastern District in 1986. As U.S. Attorney, Levi managed an office of more than 50 attorneys and supervised one of the largest public corruption investigations in California history, leading to the prosecution of several California state legislators for bribery and extortion. In 1990, President George H. W. Bush appointed Levi as U.S. district judge. Levi became chief judge in May 2003.

His appointment at Duke was hailed by several legal scholars.

Harold Koh, dean of Yale Law School, said, “Throughout his career, David Levi has been an intellectual leader as a law journal editor, a law clerk, a prosecutor and innovative federal judge. His penetrating intelligence, easy good humor and keen understanding of law’s real-world power will make him an outstanding dean for Duke’s law school.”

Gerhard Casper, former president of Stanford University and former dean of the law school at the University of Chicago, added, “Judge Levi’s appointment sends a message that Duke values academics but has the courage and boldness to pick someone intellectual from the core of the profession. Levi has become one of the country’s most distinguished, thoughtful and influential judges, whose contributions off the bench to the improvement of the federal judicial system have been countless and important.”

John Jeffries, dean of the University of Virginia School of Law, said, “David Levi is a brilliant leader, gifted in intellect, in judgment and in ecumenical appreciation of merit. He will make a splendid dean.”

Long recognized as a leader in legal reform, Levi was appointed by former Chief Justice William Rehnquist to the Advisory Committee on the Federal Rules of Civil Procedure in 1994, and was appointed chair of that committee in 2000. In 2003, Rehnquist appointed Levi to chair the Judicial Conference Committee on Rules of Practice and Procedure, which oversees all federal rule-making conducted by the Judicial Conference, the body charged with revising and crafting rules and practice for approval by the U.S. Supreme Court.

Levi is a member of the Council of the American Law Institute (ALI), and has served as an advisor to the ALI’s Federal Judicial Code Revision and Aggregate Litigation projects.

In 2002, he co-authored “Federal Trial Objections” with U.S. Magistrate Judge Peter Nowinski. Levi will be teaching a course on complex litigation this spring at the University of California at Davis School of Law, where he is one of the founders of the American Inns of Court chapter.

Levi also is co-author of the Report of the Ninth Circuit Task Force on Racial, Ethnic and Religious Fairness.

Lange said Levi was selected following an eight-month national search from among more than 200 candidates. Lange praised the search advisory committee and its chair, James Cox, the Brainerd Currie Professor of Law at Duke, for identifying “a stellar group” of finalists for the position.

He has been married since 1973 to Nancy Ranney, who manages a grass-fed cattle ranch. They have two adult sons, Joseph and William.

Levi will be a second-generation law dean. His father, the late Edward H. Levi, served as dean of the University of Chicago Law School and then as that university’s president, before being appointed by President Gerald Ford as U.S. Attorney General in 1975.