ABA President Dennis Archer Calls on Students to be Healers

Dennis Archer loves the law. That's what the American Bar Association president told Duke Law students when he spoke at the School as part of its "Great Lives in the Law" series.

As he portrayed his life in the law and how he came to love it, Archer described his decision to change career paths and move from teaching in Detroit's public schools to law, a change that he made upon the suggestion of his wife. Archer took the LSAT the first time it was offered. "[My scores] suggested I'd be successful, so I went to law school."

Archer has a very involved history with the law. During his career, he has been president of the Wolverine Bar, the National Bar Association, the State Bar of Michigan and now the American Bar Association (ABA). He was also appointed to the Michigan Supreme Court, where he served two terms before giving up that job to become the mayor of Detroit.

People of color were not always welcome in the American Bar Association, but in 1971 Archer was invited to instigate change. At the same time the ABA appointed him chair of the Commission for Minorities in the Profession in 1986, it also appointed Hillary Clinton as chair of the Commission on Women in the Profession. "Hillary and I made quite a team," Archer said. "As I opened doors for lawyers of color, she knocked down the glass ceiling for women." 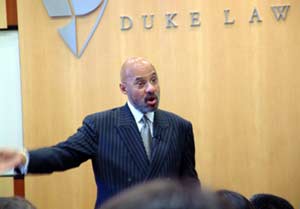 Archer may enjoy practicing law, but he loves using his skills and knowledge toward public service. His career choices reflect his clear belief that lawyers have a long history as, and responsibility to be, public servants. "We do good work. Lawyers are the only ones who will step up to the plate to represent the poor and defenseless," Archer said.

During his speech, Archer gave students many examples of how lawyers serve as public servants, citing Thomas Jefferson, John Adams and Abraham Lincoln. He mentioned John Foster Dulles and William Fulbright, and he spoke of lawyers who work every day, unrecognized, for those in need.

"I believe that lawyers have the power to heal," Archer said. He reflected on the oath all lawyers take that includes faithfully representing clients, undertaking representation of those in need and upholding the law. "It is therefore logical to view lawyers as public servants."

But, the law isn't for everyone. Archer believes lawyering is a "calling" and that lawyers are "ministers of justice." He told students to think of themselves as healers and that taking this view allows them to positively affect change in difficult situations. Archer gave students vivid examples of Mohandas Gandhi, Franklin Roosevelt, Thurgood Marshall and Duke Law School's own Senior Associate Dean Jim Coleman as lawyers who have used their healing powers to impact the greater good of the people they serve.

Archer called on students to become active in their state or local bar association as well as the ABA as a vehicle to become involved in public service. "You will bring justice and resolution to issues that seem so incredibly unjust and so irresolute," Archer said.

While reminding students to lead a balanced life, Archer told students it will be very easy to become too busy to do anything besides work. "In connecting with your communities and the world, don't forget to connect with yourself and your loved ones. It won't be easy... I am here to tell you it can be done."

Archer left students with a strong message. "When you leave this great law school, you're going to be well prepared. You never know what might be out there for you. But, one this is absolutely clear, unless you are ethical and practice good ethical habits, unless you connect and bond with your community and show them the respect they deserve, unless you practice good law and are always respectful of your fellow attorney with whom you practice, you never know what life might come and offer you. But, you've got to be prepared. You are getting the best education you can find anywhere."