Constitutional Issues in Afghanistan and Iraq 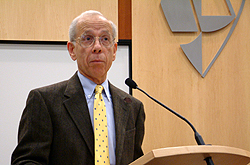 In a country as heterogeneous as Iraq, building a new nation in the aftermath of the war will be an extremely complex task, Duke Law Professor Donald Horowitz, a leading expert on ethnic conflict, said before a packed lecture hall on April 8.

“It’s much more complex than the press reports,” said Horowitz, the James B. Duke Professor of Law and Political Science. For example, he noted, not all of the population in northern Iraq is Kurdish, adding that the Kurds themselves are divided. In fact, most ethnic groups in Iraq, whether relatively large or small in number, are made up of politically disparate subgroups.

If not addressed properly in a post-Saddam Iraq, those differences could result in awful consequences, especially in areas such as the northern city of Kirkuk, where competing groups will vie to control oil revenue. “That city could become a battleground,” he said.

However, as in Afghanistan and other nations recently torn by conflict, Iraq has a chance to emerge as an inclusive society with autonomy for various ethnic groups. Horowitz, who has consulted with the commission drafting a new constitution for Afghanistan, said a number of questions must be answered in Iraq before an appropriate form of government can be chosen. Those same questions are at play in Afghanistan even now.

Horowitz has been consulted on constitutional and ethnic conflict issues in countries around the world, including Nigeria, Indonesia, Bosnia, Fiji and Afghanistan. An often-cited expert, he is the author of more than 50 articles and eight books. He spoke as part of the Food & Thought series, which brings together students, faculty and members of the community to discuss major issues of the day.

On the whole, Horowitz said, the process of nation-building in both Afghanistan and Iraq will be difficult, with many forces pulling in various directions. “Don’t count on a beautiful result in either country,” he said.