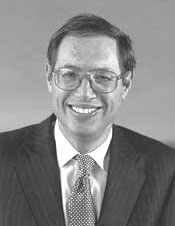 Professor Richard Epstein (Oct. 2nd, 9am) reflects on antidiscrimination laws since his book Forbidden Grounds. The Federalist Society is proud to welcome Professor Richard Epstein to Duke Law school on this Thursday, October 2nd at 9am in Room 3043. Light breakfast will be provided. A description of Forbidden Grounds by Harvard University Press follows:

"This timely and controversial book presents powerful theoretical and empirical arguments for the repeal of the anti-discrimination laws within the workplace. Richard Epstein demonstrates that these laws set one group against another, impose limits on freedom of choice, unleash bureaucratic excesses, mandate inefficient employment practices, and cause far more invidious discrimination than they prevent. Epstein urges a return to the now-rejected common law principles of individual autonomy that permit all persons to improve their position through trade, contract, and bargain, free of government constraint."

Richard A. Epstein is the James Parker Hall Distinguished Service Professor of Law at the University of Chicago, where he has taught since 1972. He has also been the Peter and Kirstin Senior Fellow at the Hoover Institution since 2000. Prior to joining the University of Chicago Law School faculty, he taught law at the University of Southern California from 1968 to 1972. He served as Interim Dean from February to June, 2001. He received an LL.D., h.c. from the University of Ghent, 2003. He has been a member of the American Academy of Arts and Sciences since 1985 and a Senior Fellow of the Center for Clinical Medical Ethics at the University of Chicago Medical School, also since 1983. He served as editor of the Journal of Legal Studies from 1981 to 1991, and of the Journal of Law and Economics from 1991-2001, At present he is a director of the John M. Olin Program in Law and Economics. His books include Skepticism and Freedom: A Modern Case for Classical Liberalism (University of Chicago, 2003): Cases and Materials on Torts (Aspen Law & Business; 7th ed. 2000); Torts (Aspen Law & Business 1999); Principles for a Free Society: Reconciling Individual Liberty with the Common Good (Perseus Books, 1998): Mortal Peril: Our Inalienable Rights to Health Care? (Addison-Wesley, 1997); Simple Rules for a Complex World (Harvard, 1995); Bargaining With the State (Princeton, 1993); Forbidden Grounds: The Case Against Employment Discrimination Laws (Harvard, 1992); Takings: Private Property and the Power of Eminent Domain (Harvard, 1985); and Modern Products Liability Law (Greenwood Press, 1980). He has written numerous articles on a wide range of legal and interdisciplinary subjects. He has taught courses in civil procedure, communications, constitutional law, contracts, corporations, criminal law, health law and policy, legal history, labor law, property, real estate development and finance, jurisprudence, labor law; land use planning, patents, individual, estate and corporate taxation, Roman Law; torts, and workers' compensation.