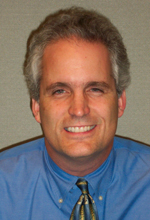 As associate director and executive director of development and communications for the Duke Comprehensive Cancer Center, Thomas B. Hadzor led a capital campaign with a $50 million goal that will conclude at the end of the year. To date, the campaign has raised more than $110 million, and Hadzor expects that number to rise before New Year’s Eve.

Fresh from that success, Hadzor is set to bring his more than two decades of fund-raising experience to the Law School, where he will replace outgoing Associate Dean for External Relations Linda Steckley. Steckley, who led a successful $55 million fund-raising campaign at the Law School, departs this month for a position at The Brookings Institution in Washington, D.C. Hadzor, who officially begins his new job July 1, already has begun attending meetings and learning about the Law School.

“Linda Steckley's departure this month is a big loss for the Law School, but we are fortunate already to have found a terrific replacement in Tom Hadzor,” said Dean Katharine Bartlett. “Tom brings his extensive experience and talents as a fundraiser to Duke Law School, and I look forward to introducing him to our alumni and friends.”

Hadzor said his approach to fund-raising will be straightforward: communicate the successes and plans of the Law School to alumni and other key constituencies and invite their help in meeting the School’s goals. “It’s a matter of communicating well,” he said. “You have to spread the word about all of the important things going on here and then connect people with the ambitions of the School.”

Hadzor said he looks forward to the intellectual challenge of shifting from his work at the Cancer Center to joining the Law School administration. “This will be a whole new area for me, and it will be stimulating to learn more about it,” he said. “When you think about the rule of law, you begin to think about how societies begin, the rules by which we interact with each other. The law is something that’s fundamental to how we organize life.”