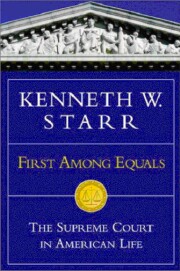 Distinguished graduate Ken Starr ’73 returns to the Law School on Monday, Jan. 13 to lead a brown-bag lunch discussion of his latest book, First Among Equals: The Supreme Court in American Life. The event, sponsored by the Program in Public Law, will be held at noon in Room 3043. Starr will be available to autograph copies of the book (limited copies available in the Dean’s Office, or online at amazon.com) immediately following the event in the Blue Lounge.

In First Among Equals, Starr draws on his experience as a law clerk to Chief Justice Warren Burger, as well as a federal appellate judge and U.S. solicitor general, to offer insights into the inner workings of the Supreme Court. In examining the Court over the last 30 years, Starr reviews significant opinions involving some 14 areas of law, ranging from freedom of speech to abortion to affirmative action to criminal procedure. Starr finds the Rehnquist Court centrist and lawyerly – a stark contrast to the activist court under Earl Warren. One focus of the book is the leadership role played by individual justices such as Lewis Powell on the Burger Court, and Sandra Day O’Connor and Stephen Breyer on the Rehnquist Court. Starr calls Justice O’Connor, who will visit Duke Law in March, the "most influential and powerful woman in America."

Kenneth Starr was born in Vernon, TX in 1947, the son of a Church of Christ minister. He earned his undergraduate degree from George Washington University in 1968 and went on to Brown University for a master's degree in political science before pursuing his law degree at Duke. After completing a clerkship with Chief Justice Warren Burger in 1977, he worked with the law firm Gibson Dunn & Crutcher in its Los Angeles office. He returned to Washington in 1983 as a counselor to President Ronald Reagan's Attorney General, William French Smith. He served for several years as a judge with the U.S. Circuit Court of Appeals for the District of Columbia before being named as President George H.W. Bush’s Solicitor General in 1989. He returned to private practice in 1993 as a partner with the law firm Kirkland & Ellis, and was appointed as the independent counsel in the Whitewater investigation in August 1994. He currently practices with Kirkland & Ellis in Washington.