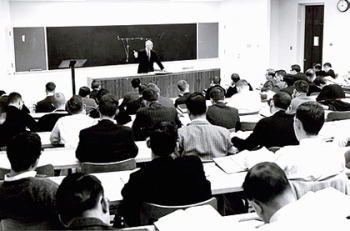 Gaede and his classmates are now paying Jack Latty’s support forward, using their 50th reunion gift to establish a scholarship in honor of the dean who led Duke Law from 1957 to 1966. They have been joined in the effort by members of the Class of ’69 — all Latty recruits — who are celebrating their 45th reunion this year.

Gaede, a partner at Bainbridge, Mims, Rogers & Smith in Birmingham, Ala., recalled Latty’s persuasive pitch for Duke when they met at Yale in 1960 as well as his talents as a teacher and the facility with which the dean arranged a 2L summer position for him with a simple phone call. Gaede went on to spend more than 40 years at that Birmingham-based firm, Bradley Arant Boult Cummings, including six as managing partner, and has enjoyed a career that has taken him all over the world.

"Most of us felt close to the dean," Gaede said of Latty. "He was someone we all appreciated and admired."

Along with classmate Stephen Crawford, a member at Hand Arendall in Mobile, Ala., Gaede is co-chairing the Class of ’64 reunion committee. The gift in Latty’s honor is a particularly fitting tribute to the late dean’s belief that scholarships gave opportunities to those who were qualified but did not have the resources to attend law school, he said, adding that it remains true today. "Like many, we are concerned about the ever-increasing cost of higher educa­tion, including law schools, and how cost can be a bar to some."

Citadel graduate J. Sidney Boone ’69 gave up a scholarship at Wake Forest Law School after Latty called him to say "he had a space for me at Duke if I wanted to come." At Duke, professors such as Bertel Sparks and John B. Johnson opened doors to his career in real estate law, and the network of classmates and alumni he developed helped it flourish.

"Dean Latty made it possible for me to go to Duke," said Boone, of counsel at McNair Law Firm in Charleston, S.C., who is chairing his class reunion committee. "He was so personable — it was just a delight to be around him, to be in his classes, and to be at the Law School."

Jeffrey Lewis ’69 had just graduated from Duke University as a zoology major and was enrolled in law school at the University of Chicago when Latty lured him back to Durham.

"He told me he thought I would really like to stay at Duke and he liked my science background and, by the way, our entering class would have the highest LSAT [scores] in the country," said Lewis, dean emeritus and professor of law at Saint Louis University School of Law. "We all had him for his Chattel Transactions course in our first year. He was just absolutely a wonderful teacher and dean and human being. He remembered everyone’s name and where we had gone to undergrad and what we had majored in.

"The impression he made on me certainly had a great influence on my decision to become a law professor. And I have been dean at two major law schools; he had something to do with that too," said Lewis. "I think the student scholarship fund in his name is ideal, since he loved students."