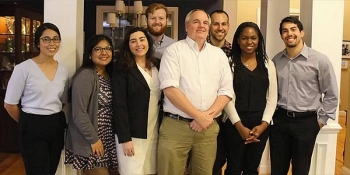 1GP students with Judge Todd Hughes ’92 of the U.S. Court of Appeals for the Federal Circuit (fourth from right)

Both Charles Bowyer and Ocoszio Jackson arrived at Duke Law in the fall of 2014 with long records of academic success. But as the first members of their families to attend law school, they also arrived with some concerns relating to professional development that they suspected weren’t shared by many of their peers in the Class of 2017.

“Law School is a very unique graduate-level program and I think that if you haven’t known someone who’s gone through it, you are at a bit of a disadvantage in understanding what is expected in interacting with a professor, or with potential employers,” said Jackson, a native of Dublin, Ga., who was a political science major at Morehouse College.

“Everyone seemed to have parents who were doctors or lawyers and had sort of a built-in familiarity with the path they were on,” said Bowyer, who majored in political science at California State Polytechnic University in his home state of California. “Both my parents worked for the same grocery chain in California, called Stater Brothers, and so while I was doing fine academically, it was just a bit of a shock.”

Bowyer, who is now an associate at Robinson Bradshaw in Charlotte, and Jackson, now an attorney in the U.S. Department of Housing and Urban Development’s Legal Honors Program, had something else in common: career counseling from Jennifer Caplan, the Law School’s assistant director for professional development programming and advising.

Caplan’s conversations with Jackson, Bowyer, and other students on track to be the first lawyers or professionals in their families gave her the idea for an initiative to help them address concerns relating to classroom success and professional development. The result: First Generation Professionals (1GP), an enhancement program that pairs students in that situation with upper-year student and alumni mentors, and organizes events targeted to their interests, such as small-group conversations with faculty, representatives of law firms, and insights into professional etiquette. In October, Judge Todd Hughes ’92, of the U.S. Court of Appeals for the Federal Circuit, had lunch with the group and shared his career insights as a first-generation professional.

Zach Henson ’20, a co-president of 1GP, which students lead with support from Career Center counselors, said students are often shy about seeking the kind of advice the program offers.  “It’s really helpful to have someone who has been there, who you can talk to completely freely,” he said.

Assistant Dean for Student Affairs Lewis Hutchison, who worked with Caplan to create 1GP, knows first-hand how important that is, having been among the first in his family to attend college. “You don’t know what you don’t know, and so you worry about questions that might sound ridiculous,” he said. “But if you’re talking to someone who’s been in your shoes, you’re not afraid to ask.”

Some 1GP students may also be reluctant to approach faculty for advice, said Henson, who was a history major and political science minor at Eastern Kentucky University.

“It wasn’t something I was familiar with coming in,” he said. “I never met with my undergrad professors unless we were assigned meetings. I figured they were busy and I didn’t feel like I should take up people’s time. I just did the work to the best of my abilities.”

Over lunch, Professor of the Practice Donald Beskind ’77 assured the group that making full use of the faculty was a crucial part of the Duke Law experience.

“When you come to law school, the classes aren’t the only thing you get,” Beskind said. “You get your fellow students, you get the programming, you get contacts and build networks, and if all you’ve gotten when you’ve left Duke is the classes, you’ve really missed a huge part of the experience. Learning how to access all these other thing, particularly the faculty and resources of places like student services and career services, those are really important skills.”

Building career contacts and networks can start with professors, who, Beskind added, “derive real pleasure from helping someone get started, and feel it is a reward in and of itself.”

The interviewing and resumé-writing process can be particularly daunting for 1GP students, Caplan said, because their job experience often has more to do with financially supporting themselves than with accruing law-specific experience. To that end, she enlisted attorneys at Latham & Watkins and Shearman & Sterling as well as her fellow career counselors to advise and assist students.

Diamond Zambrano ’20, another 1GP co-president, said that the Shearman & Sterling event was especially helpful to her.

“They had a list of every question you might be too embarrassed to ask someone at a networking event,” Zambrano said. “It was just so helpful. The firm representative was part of their 1GP affinity group himself, and that created a really comfortable space for all of us.”

Caplan also invited Bowyer back to Duke Law to share his insights at a 1GP lunchtime event. He recalled being concerned that the various jobs he held to finance his undergraduate studies – as a bartender, waiter, karate and muay thai instructor, and mixed martial arts competitor – would not add value to his legal resume.

“It turns out they were great things to put on a resume because in interviews, people like to talk about that kind of stuff,” Bowyer said. “It shows you’re a hard worker, that you’ve developed personal skills and know how to talk to people, which can be undervalued in school yet so important when you work in a law firm. I worked at Buffalo Wild Wings as a bartender and a server, and in that kind of work you learn a lot about reading people. Some people want you there every five seconds, some want to be left alone and actually, I think that’s a skill that has been as helpful to me as many I learned in school.”

Henson, who also had waited tables, bagged groceries, and mowed lawns, prior to law school, said it “took a lot of convincing” from Caplan to include them on his resume. “I thought, I haven’t interned with a judge or worked at a firm, my resumé is terrible,” he said. “But she said, ‘No, what you did waiting tables was so useful in terms of client contact skills, and that’s something that firms value. And when you show that you did all that work while in undergrad, while maintaining your academics, and graduating in three years, you show that you can prioritize tasks, you are willing to work extremely hard. These are all valuable qualities that employers are seeking out.’”

Jackson, who mentors a first-year student, said they have discussed strategies for coping with the academic stress of law school.

“I reached out during finals and told her, ‘You don’t need to forgo anything. Eat, take care of yourself. Also, there are resources to draw on while preparing for finals — you can work with classmates and some professors give out practice exams.’ These are things some people don’t know and might not know to ask about.”

Having engaged 30 students in its inaugural year, 1GP promises to serve an important function at Duke Law going forward said Beskind, a member of the school’s Career Services Committee. “If law school isn’t just going to be for the children of lawyers or other professionals and if we have a commitment to broadening the base then we have to really plan and organize ways to help people acquire the skills that will make them successful professionals.”