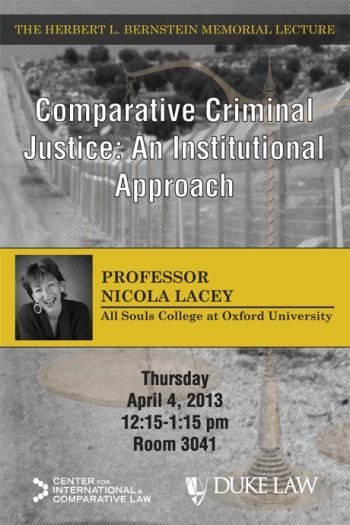 Nicola Lacey holds a Senior Research Fellowship at All Souls College and is a Professor of Criminal Law and Legal Theory at Oxford University Faculty of Law. She moved to Oxford in October 2010, having held a chair in Criminal Law and Legal Theory at the London School of Economics since 1998. Before that, she was Professor of Law at Birkbeck College, University of London (1995 to 1997); Fellow and Tutor in Law at New College and CUF Lecturer at Oxford (1984 to 1995); and Lecturer in Laws at University College, London (1981 to 1984). She has held visiting appointments at the Humboldt University in Berlin, the Wissenschaftskolleg zu Berlin, the Research School of Social Sciences at the Australian National University, New York University, Yale and Harvard. She is an Honorary Fellow of New College and of University College, and a Fellow of the British Academy.

In December 2011 she was awarded the Hans Sigrist Prize by the University of Bern.

Professor Lacey's research is in criminal law and criminal justice, with a particular focus on comparative and historical scholarship. Over the last few years, she has been working on the development of ideas of criminal responsibility in England since the 18th Century, and on the comparative political economy of punishment. Her next project will be a comparative study combining analysis of penal policies with analysis of practices of legal responsibility-attribution in selected areas of criminalization, framing these issues within a broad comparative political economy of crime and control. She also has research interests in legal and social theory, in feminist analysis of law, in law and literature, and in biography.