Two recent Duke Law graduates can now count themselves in that exclusive group: Coalter Lathrop ’06 and Michael Gilles ’10, who each received an LLM in international and comparative law along with their JD degrees, represented Costa Rica before the ICJ in mid October.  Lathrop, Costa Rica’s lead and sole outside counsel, led a team of Costa Rican attorneys, diplomats and technical advisors and was one of five members of the country’s legal team to make oral presentations to the court in support of its application to intervene in a maritime boundary dispute between Nicaragua and Colombia.

“It became pretty clear to me observing the process in Equatorial Guinea’s case that I didn’t want to be just ‘the map guy’ for the rest of my life,” he says, laughing.  “All the fun was being had by the lawyers up at the podium.”

“Not just having great courses on the regular curriculum, but also having the ability to develop ad hoc seminars with faculty members created limitless opportunities to pursue your intellectual curiosity,” he said.
Gilles, who entered law school as a Latin American studies major with a strong interest in international relations and development said his Duke Law experience prepared him perfectly both for his dream job — working as an attorney for the State Department — and his ICJ experience. 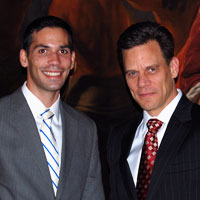