2. During my free time, I love to: Watch my two daughters play.

3. Pick one: top three favorite musicians/bands; favorite non-law read; one TV show I never miss: My wife Rebecca and I usually watch The Office. It's where I have learned my management lessons, as my colleagues can confirm.

4. Favorite law school memory: I remember pacing next to the TV with Keith Wex during the timeout, looking at the couch where 15 of our friends were gathered with grim expressions, as Keith and I were optimistically trying to determine how Duke could possibly beat Kentucky down with 2 seconds left during the 1992 Elite Eight game. Having won the year before - especially beating powerhouse UNLV - anything but another championship had been inconceivable. When the shot went in, pandemonium in the room and everyone piled on. Lots of other memories of basketball and friends at the Hideaway. Despite my best efforts, I also still vividly recall staring at my 1L Con Law exam for at least a half an hour and having no idea what the issue was. Seriously. That was a bad feeling.

5. Favorite Durham restaurant or activity: There are a lot of great restaurants, so it's hard to pick. Plus, there's with kids or without
kids. With kids - Eastern Lights - Chinese. In addition to being great
food and a family business where they love kids, the owners' son is a Duke Law graduate whom I know. Without kids - we sometimes go to the casual part of the Washington Duke for a burger. Getting babysitters is a challenge, so any law students wishing to babysit - just let me know! 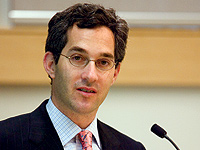