Join Henrikas Mickevičius, lawyer and director of the Human Rights Monitoring Institute in Vilnius, Lithuania, for a lunchtime lecture as he discusses "Review of U.S. Rendition Practices by the European Court of Human Rights." This event is cosponsored by CICL and LENS. Lunch will be served.

Abstract
Central to the presentation by Mr. Michevicius is the case of El-Masri v. Macedonia:

Recently the European Court of Human Rights heard a case brought by Khaled El-Masri, an individual suspected of terrorist activity who was later found to be completely innocent and uninvolved in the alleged misdeeds. El-Masri, a citizen of Germany, was abducted by officials in Macdedonia, held and turned over to CIA operatives. He was flown to various locations in Asia and Europe where he was tortured and coerced. The CIA eventually concluded that El-Masri had not engaged in any terrorist activities. He was taken to Albania and released.

In separate earlier litigation, the US courts held that a suit by El-Masri in the US for damages was barred by the U.S. “state secrets doctrine.” Specifically it was held that El-Masri’s complaint could not go forward because of assertions by the U.S. government that state secrets would be revealed in any trial on the matter.

The European Court of Human Rights found that the treatment of El-Masri by Macedonia violated numerous provisions of the European Convention on Human Rights. Because of the "extreme seriousness" of the violations, the Court ordered Macdeonia to pay damages to El-Masri.

The Court specifically rejected the argument that protection of state secrets required a different result. "The concept of ‘state secrets’ has often been invoked to obstruct the search for the truth," the Court stated. Hence, what the U.S. court said were strong and necessary policies to protect covert government actions were found to have no substantive effect in under the European Convention on Human Rights.

Biography
Henrikas Mickevičius graduated from the law of the Vilnius University (VU), Faculty of Law with a specialization in Criminal Law and Criminal Procedure, and did post-graduate studies at George Washington University and Dickinson School of Law (human rights and public international law). He is affiliated with the United Nations Centre for Human Rights (New York) and the European Court of Human Rights (Strasbourg).

Henrikas Mickevičius was a member of the Judicial Selection Commission, the permanent Council of Europe, OSCE, UN and other intergovernmental and international non-governmental organizations. He regularly teaches seminars in Georgia, Russia, Belarus, Serbia, Armenia, Azerbaijan, Moldova for judges, prosecutors, lawyers and NGOs. He has also taught at Vytautas Magnus University Law School and the Institute of International Relations and Political Science in Vilnius. 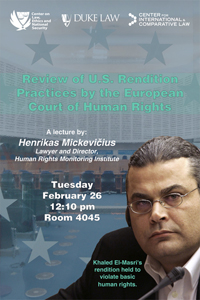