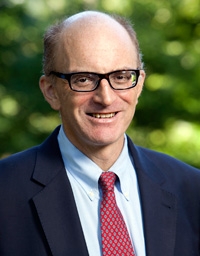 In his latest book, Well-Being and Fair Distribution: Beyond Cost-Benefit Analysis (Oxford University Press, 2012), Professor Matthew Adler discusses how to incorporate a concern for inequality into cost-benefit analysis. He proposes to do so via “prioritarianism:” a framework that gives greater weight to well-being changes affecting individuals at lower levels of well-being.

“One way to think about the book is that it’s an argument for a weighted cost-benefit analysis, where dollar costs and benefits are first multiplied by weights before being added up, and weights are assigned in this ‘prioritarian’ fashion,” says Adler, the Richard A. Horvitz Professor of Law who holds secondary appointments in philosophy and public policy at Duke University.  “This is clearly [an area] where we need a lot more research. The book is trying to bring together the economics and the philosophy.”

The multi-disciplinary book, which was the focus of a special session during the Association of American Law School’s 2013 annual meeting in New Orleans in January, is a follow up to his 2006 work, New Foundations of Cost-Benefit Analysis (Harvard University Press, with Eric Posner).  Together they represent an effort to provide firm normative foundations for cost-benefit analysis and to show how the technique can be refined, says Adler, who joined the Duke Law faculty in 2012 from the University of Pennsylvania and who serves as director of the new Duke Center on Law, Economics and Public Policy.

Cost-benefit analysis became a part of the review process for any proposed executive branch regulation during Ronald Reagan’s presidency, and has been used under every president since, he explains. Regulations involving public health, safety, and the environment are all examined through the cost-benefit lens. 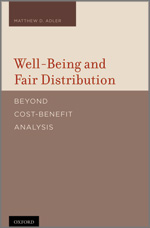 “At first, people said, ‘Oh, this is just a Republican thing,’” Adler says. “But Clinton and Obama kept it in place. Now I think a lot of people agree that we should refine it going forward.

“There are lots of complications, but the basic idea behind cost-benefit analysis is to take different aspects of well-being, whether it be income or health or environmental effects or what-have-you, and then try to measure those in terms of dollars, which are used as a common scale.  I’m advocating a more nuanced analysis. So if you’re talking about regulating pollution in factories that tend to be located in poorer areas, the environmental benefits might be given greater weight as opposed to pollution that affects the average citizen, who can better weather a drop in property value or afford better health care.”

Cost-benefit analysis attempts to reduce complicated problems to an understandable dollars-and-cents formula, but it may oversimplify, not taking into account the fact that “a dollar means something very different to Mark Zuckerberg than it does to most people,” Adler adds.

“Imagine that there is a pollution regulation, and an analyst assesses the costs and benefits of that. The benefits will be less pollution, the costs will be costs for the shareholders of the companies that have to comply with regulations in place, maybe for consumers, maybe costs for workers. What cost-benefit analysis has to do, which is quite complicated, is figure out the costs for all these groups, in dollars, and add them up. So consumers will pay higher prices, shareholders might have smaller profits, workers might have lower wages. People might have cleaner air or water, and then we try to come up with dollar equivalents for that.  Prioritarianism would take account of how well off these different groups are.”

The book addresses theory and specifics, Adler points out.  “The book is mainly trying to get the theory right, but there is also analysis of how to calibrate weights.  This idea of attaching weights to costs and benefits is actually used in practice, not in the U.S., but in the U.K., for example; the folks who do cost-benefit in government, already do this to some extent.”

The ideas for the book proceed naturally from Adler’s extensive work on cost-benefit analysis, and from recent events.

“I’m interested in inequality, and there is increasing national interest in inequality, so I’ve been working on refining policy analysis to take account of considerations of equity, of fair distribution.  This idea of prioritarianism is a systematic way to do that.”

The multi-disciplinary nature of Well-Being and Fair Distribution has been widely acknowledged by such leading thinkers in economics and philosophy as Daniel Hausman, who called it “a remarkable achievement” in a review for the Cambridge University journal Economics & Philosophy.  “It is several books in one,” wrote Hausman, “drawing on many different literatures in philosophy, economics, decision theory and law. The vast knowledge that it demonstrates and the care, persistence and precision of its argumentation are hard to convey.”