The trip is a rite of passage for editors on the semiannual journal devoted to legal issues affecting the 49th state, which has been published at Duke since 1984. 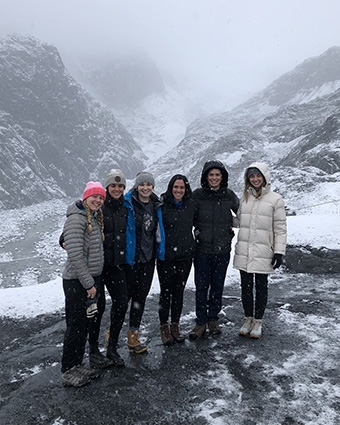 The executive board of one of Duke’s student-edited journals ventured 3,500 miles from Durham in October to spend their fall break in Anchorage, Alaska.

The trip is a rite of passage for editors on the semiannual Alaska Law Review, which is devoted to legal issues affecting the 49th state. Third-year students Sasha Kahn, Mary Beth Barksdale, Margot Graham, Megan Mason Dister, Emma Giusto, and Hannah Rogers made the trek, during which they met with local practitioners and hosted the journal’s fifth symposium, the first to be held in person since 2018.

“ALR is different than a lot of journals, because we have a client, the Alaska Bar Association,” said Kahn, the journal’s editor-in-chief. “So meeting in person is vital to keep up that relationship and really make sure a journal is focused on that client.”

ALR has been published at Duke since 1984, and prior to the trip, the bar association renewed its multi-year contract with the Law School. Frequent topics in the journal include environmental and natural resources law and the rights of the state’s large indigenous population. ALR also publishes an annual year-in-review issue consisting of summaries of significant decisions from courts in the state.

Each year, Duke pays for staff editors who have written at least one note to travel to Alaska to learn more about current legal issues and trends in the state and discuss ideas for future issues. Editors stay with families of members of the bar association and meet with local lawyers and judges.

Among the practitioners the students met with this year were a justice on the Alaska Supreme Court, the Anchorage public defender and federal public defender, an assistant Alaska attorney general, an attorney with the American Civil Liberties Union, and multiple attorneys from local law firms. They also attended oral arguments for two cases before the Supreme Court — one related to the Indian Child Welfare Act and another about public sector union membership — and an event hosted by Dorsey & Whitney LLP’s Anchorage office, where they spoke with Alaska Bar Association President Jessica Graham ’97.

Kahn wrote about the trip for the October-December issue of the bar association’s quarterly Alaska Bar Rag, calling it “truly an unforgettable experience.”

The Oct. 14 symposium, which was offered both online and in person at the University of Alaska-Anchorage, examined “Alaska and the Environment.” The program featured a keynote address by Elizabeth Saagulik Hensley, vice president of external and government affairs at Alaska Native Corporation NANA, as well as panel discussions on wildlife and fishing issues and land management and partnerships.

“As the symposium coordinator, I've gotten to know many practitioners in Alaska and what their perspectives are on different environmental issues and what they think are the most important issues in their state,” said Dister, the journal’s special projects editor. “I want to do public interest environmental law, and so that's been really cool to learn specifically how Alaska fits into the national issues we think about related to environmental law.”

Students also had the opportunity to experience some of Alaska’s natural attractions and unique culture, including hiking in Kenai Fjords National Park and the mountains above Anchorage, training with Iditarod Alaskan Huskies, walking along the coastal trail downtown, and touring the world’s only muskox farm. (See Duke Law's Facebook page for more photos).

The full text of the current issue of ALR is available on the journal’s website along with searchable PDFs of past issues.