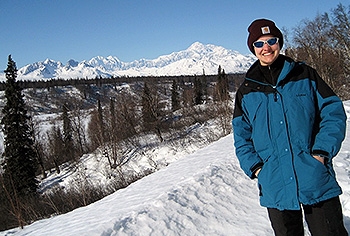 Former ALR Editor-in-Chief Jennie Morawetz ’13 has gone on to federal clerkships in Anchorage.

The June 2014 issue of the Alaska Law Review – Vol. 31, No. 1 – includes a critique of exemptions from federal employment regulations given to Alaska Native Corporations and an analysis of the role non-lawyers play on administrative tribunals in the state, both written by members of the Alaska bar. Student contributions focus on Alaska’s recidivist laws, legal solutions to air pollution caused by winter wood burning in Fairbanks, and the unpredictability of litigation costs for plaintiffs under the state’s Rules of Civil Procedure.

The topics were all suggested by ALR readers – lawyers and judges in the state. Each year, over fall or spring break, all the Duke Law student editors travel to Alaska to meet with them and learn about current legal issues in the state, which has no law school. It’s a unique tradition for a unique journal published semi-annually Duke since 1984.

“One of the things that was special for me about the journal was its feeling of practicality. It matters to lawyers and judges in Alaska,” said Jennie Morawetz, JD/MEM ’13, who as a 3L served as editor-in-chief. “When I went on the Alaska Law Review trip and met with members of the legal community, it was cool to ask, ‘What topics do you find interesting and what is something you would want to read about,’ and then to go back and have a student write a note or solicit an article on the topic. And it was great to get direct feedback from readers on previous articles.

“The Alaska Law Review is a good, old-fashioned law review that has a close connection to people who are actually practicing,” she said.

That connection was a key factor in the Alaska Bar Association’s decision, following a review of proposals from other law schools, to keep the journal at Duke, said Executive Director Deborah O’Regan. The June issue is the first published under a new multi-year contract between the organization and the Law School.

“Duke Law students have done consistently outstanding work on the journal and have been extremely responsive to input from our members,” she said. “We are delighted that our longstanding partnership with Duke Law School is continuing.”

The journal has also recently formed an advisory board made up of lawyers and judges from the state who can offer input to the student editors.

“When I came to Duke and joined the Alaska Law Review after living and working on the East Coast, it gave me a great opportunity to take an in-depth look at state law,” said former ALR editor Denali Kemppel ’02, general counsel of the Arctic Slope Regional Corporation in Anchorage and an advisory board member. “Now, it’s comforting to know that some of the more practical articles have been vetted and edited by smart Duke Law students.” As a bonus, each new issue of the journal brings “warm memories of Duke,” she said.

During their annual meetings with judges and attorneys from a range of practice areas, students get a sense of the complexity of legal issues they face, many relating to Alaska’s natural resources and large Native population, and all made particularly challenging by a lack of precedent, said Jonathan Ross ’11, another former editor-in-chief. “Alaska has only been a state for slightly over a half-century, and so the courts routinely encounter issues of first impression,” said Ross, who is completing a clerkship with Judge Frank M. Hull of the U.S. Court of Appeals for the Eleventh Circuit. “That’s why Alaska’s unique legal landscape lends itself well to scholarly comment.”

Beyond the opportunity to publish innovative scholarship, ALR student editors often find their introduction to the state’s small and collegial legal community benefits them in other ways, sometimes even influencing their career paths. For example, several journal editors have gone on to post-graduate clerkships in Alaska. Following her yearlong clerkship with Judge Sharon Gleason of the U.S. District Court for the District of Alaska, Morawetz will clerk for Judge Morgan Christen of the U.S. Court of Appeals for the Ninth Circuit, also in Anchorage.

“On the trip we always have breakfast or lunch with Alaska Supreme Court and Court of Appeals judges, and then have individual meetings with other judges,” she said. “By the time I was applying for clerkships, I had met many of the judges I was applying to clerk for,” Morawetz said.

Niki Ikahihifo-Bender JD/MA ’16, who calls herself a “proud Alaskan,” said the presence of the ALR at Duke made it stand out from the other law schools she was considering, and she hopes to join the editorial staff next fall. “It was at the top of my list when I ordered journal preferences this spring during the casenote competition,” said Ikahihifo-Bender, who represented Duke at the recent Alaska Bar convention and has a summer job in Anchorage with the general counsel of BP. “It would allow me, personally, to stay connected to the legal issues of my state and to directly assist Alaskan attorneys and judges in doing so.”

Students’ close ties to Alaska have been taken into account in the journal staff selection process in recent years, said Professor Thomas Metzloff, who serves as faculty advisor. “Hosting the journal has helped us attract very strong students,” he said. “Our partnership with the Alaska Bar Association has been synergistic.”

Under Duke’s new agreement with the Alaska Bar Association, the journal will be primarily distributed online. Each issue of ALR is freely available and archived online with printable and searchable PDFs, and state bar members will receive email notification when new issues are published. They can order print issues with an annual $15 subscription.

Journal editors are also helping to organize an October symposium on issues relating to Arctic exploration and development at the University of Alaska, Anchorage, in cooperation with faculty colleagues there, which will yield articles for a future issue. “It will be our first symposium in Alaska and we’re very excited about it,” Metzloff said.

In the June issue, Kristie Beaudoin ’14 ends her editor’s note with an invitation to Alaska bar members to “contribute to the conversation.

“As always, we are grateful to the Alaska Bar Association and the Alaska legal community for granting us the privilege of publishing the Alaska Law Review,” she writes, “and we look forward to many more fruitful years of working together.”