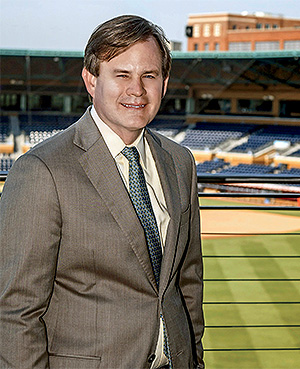 James Scott Farrin’s name is familiar to many in Durham, thanks in large part to an aggressive ad campaign for his eponymous personal injury law firm and the sign that towers over the Durham Bulls’ centerfield fence. But his representation of African-American farmers seeking redress for years of discriminatory loan practices by the U.S. Department of Agriculture has earned him national recognition as a formidable advocate for underdog clients.

“It was heart-wrenching to learn about our clients’ suffering at the hands of government representatives,” says Farrin of the six-year effort that ended in 2013 with a $1.25 billion discrimination settlement paid to thousands of African Americans who had farmed or attempted to farm. “Being a part of their redress was deeply rewarding.”

Farrin remains committed to providing access to justice, and now, along with his law firm and his wife, Robin, has made gifts totaling $325,000 to the Duke Law Civil Justice Clinic. A partnership between the Law School and Legal Aid of North Carolina, the clinic allows students to directly represent low-income clients in a wide range of civil matters. Farrin’s gift has been used to hire a new supervising attorney for the clinic; Jesse McCoy II , a former Legal Aid staff attorney and private practitioner, began a two-year position as the clinic’s inaugural James Scott Farrin Lecturing Fellow in April.

“The clinic offers students a valuable perspective on how law affects everyday people,” says Farrin, who worked with Dean David F. Levi to identify a project that would directly benefit the citizens of Durham as well as law students. “I have seen the reports on some of the clinic’s cases and talked with the Legal Aid lawyers who say the students have been a significant help to clients. An extra clinic faculty member will mean more students can be involved, and more low-income North Carolinians will receive assistance.”

Finding a niche in law and business

Farrin started his legal career in the Los Angeles area, where he spent five years doing business litigation at top firms. While he enjoyed the intellectual challenge, he says he felt emotionally disengaged from both his clients and his work. That changed when he moved back to Durham in 1995 and joined the practice of Finesse Couch ’84 as a plaintiff’s lawyer. He found the contingency-fee structure resonated with his fondness for efficiency and success-oriented compensation. And he enjoyed seeing the immediate effect of his work on his clients.

“The clients tended to be lower- and middleincome, so even smaller cases were huge for them,” recalls Farrin. “It was really motivating to see my work make such a difference in someone’s life.”

He admits to being a little surprised at how much the work satisfied him. “I’ve always been interested in the combination of law and business,” says Farrin, whose father was an international businessman, “but with plaintiffs’ work I discovered I have some of my mother — a social worker — in me as well.”

Knowing he had found his practice niche, Farrin opened a solo practice in 1997, calling on the business savvy he’d learned from his father and the marketing sense he’d picked up while working briefly in sales after college. The Law Firm of James Scott Farrin now has over 40 lawyers working in 14 offices around North Carolina. The firm has recovered over $700 million for more than 30,000 North Carolinians since its inception.

“When I graduated it was rare for a Duke Law grad to embrace the commercial side of a law firm, but I think we’ve turned what some see as a distasteful function into a strength for our firm,” he says. “Law firms are not always very well-run, and I believe it has been a competitive advantage for us to be focused on that, as well as on providing quality legal services.”

It was the firm’s reputation for organization that landed Farrin the case known as In Re Black Farmers Discrimination Litigation (“Farmers”). It grew out of a class action suit, Pigford v. Glickman that was brought by African-American farmers alleging racial discrimination by the USDA in its allocation of farm loans between 1983 and 1997. Because more than 58,000 eligible farmers missed the filing deadline after the USDA settled the Pigford claims with a payout of more than $1 billion in 1999, Congress included a provision in its 2008 Farm Bill giving the late filers a new right to sue for discrimination. A small firm heading up the Farmers case asked Farrin to help with organizing and administering the matter.

Farrin eventually took on a lead role in representing the farmers — “the case of a lifetime,” he says — investing six years and millions in out-of-pocket expenses. In addition to hiring the litigation team for the case and administering a nationwide action on behalf of tens of thousands of claimants, the firm became adept lobbyists.

Fair compensation for the discriminated victims was contingent on Congress allocating an additional $1.15 billion to satisfy successful claims. “In order to convince Congress to appropriate more money, we had to do some intense lobbying, which we hadn’t done before,” he recalls. “We staged rallies, we called the press, we had the president of the National Black Farmers Association drive a tractor through the streets of D.C. — anything to keep the case in the media’s attention.” Congress eventually agreed to fund the settlement and Farrin attended the bill-signing ceremony at the White House. “It was just an incredible cause,” he says.

Since Farmers was resolved, Farrin’s role at his firm has continued to evolve from lead attorney to managing the law firm business, “so that the other lawyers don’t have to,” he says. While he has no plans to extend his firm’s practice beyond North Carolina he remains growth-oriented, and says he will continue expanding the firm’s services. In addition to increasing its practice areas, the firm now provides business and legal consulting to personal injury firms in other states, still opting for contingency-based pay instead of billing clients hourly. “We succeed when these firms meet their goals,” Farrin says. The firm has also developed software to improve law firm management, which it is in the process of licensing out.

He still handles cases of particular interest to him, such as a current mass action suit brought by students against the Charlotte School of Law, which is under probation with the American Bar Association (ABA) and has lost its authority to participate in the federal student loan program. The complaint alleges that the private, for-profit school purposefully hid its troubles with the ABA from students in order to maintain enrollment and tuition. “In this case a for-profit law school is taking advantage of trusting students,” says Farrin. “It’s a different kind of case for us, like the Farmers case, and it really raises my ire.”

While Farrin is a gifted businessman and a persuasive advocate, he is not an actor. That well-groomed man with the grave baritone in Farrin’s ads is a paid spokesperson who replaced the actor Robert Vaughn in the role. Farrin is, in fact, soft-spoken and unpretentious. “I tried it,” says Farrin. “For half a day I tried to do a commercial and it was a humbling experience. I have the utmost respect for professional actors, and I’m happy to pay them so that I can keep my life normal and under the radar.”

That life includes time spent at his Hillsborough home with his wife Robin, who also works for the firm, his two teenage daughters, and his two adult step-children when they’re in town. Farrin has maintained ties with the Law School and hosts an annual summer reception at his office in the American Tobacco Complex for the Duke Law Club of the Triangle. He says that several professors, including Paul Haagan, Thomas Metzloff, and Donald Beskind, have provided advice over the years and were “integral” to Farrin’s success with the Farmers case.

Beskind, who practiced trial litigation in the Triangle for more than 30 years, believes Farrin’s work has had a significant effect on the legal industry. “Jim Farrin and his firm have reshaped the plaintiffs’ tort practice in much of North Carolina,” Beskind says. “Before, lawyers saw the existing model’s inefficiencies in providing services to those injured by negligence. Now, because of Jim, we know the great success possible by leveraging quality lawyering with great business acumen and savvy marketing. And beyond his firm, Jim has been a staunch supporter of legal services for the underserved. His generous gift to the Civil Justice Clinic continues those efforts.”

Clinic Director Charles Holton agrees, noting that the gifts from the Farrins and their firm directly support the low-income people of Durham by expanding the clinic’s capacity to handle cases with the addition of McCoy
to the staff. McCoy also will play a substantial role in implementing a pilot program in Durham that Holton developed with a clinic student aimed at helping renters facing eviction find the necessary resources to stay in their homes and in that way avoid collateral effects ranging from permanent damage to credit to homelessness.