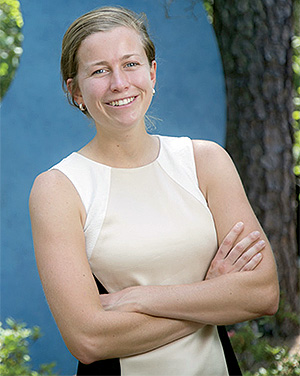 As senior class president of her high school, Rose McKinley was required to attend school board meetings in her hometown of Danville, Penn. (pop. 4,699). One member of the board, a lawyer, seemed to command more respect than the others, she noticed. Later, when she began writing columns for her college newspaper about issues such as sexual assault, the death penalty, same-sex marriage, and voting rights, McKinley thought back to that man.

“Everybody seemed to listen to him a lot more than everybody else on the board,” says McKinley, who graduated in May with a JD/LLM in Law and Entrepreneurship. “I thought that if I could understand the law better, I could better articulate why those issues mattered. And so that just fit back into my experience growing up in a small town and how this guy who had been legally educated was able to be a better citizen.

“I think if there’s one thing about law school that really appealed to me, it was the ability it gives you to be a better citizen and a better community member.” McKinley already has a head start. At Duke, she was a highly visible student leader, serving as president of the Duke Bar Association (DBA), attorney general of the Graduate and Professional Student Council, a member of the OutLaw board, and a staff editor of Duke Journal of Gender Law & Policy. Her enthusiasm for engaging with her fellow students won her both the Outstanding Contribution to the Duke Law Community Award from the DBA and the Law School Community Award from the faculty, and she shared the Justin Miller Award for Leadership with classmate Marcus Benning.

“Rose McKinley … has distinguished herself in serving and strengthening the Law School community,” Clinical Professor Erika Buell said in presenting the faculty award on May 12. “Rose’s mom had a rule that you can’t complain about anything unless you’re taking action to change it. Rose is committed to making incredible positive change.”

McKinley’s hometown was a typical rural community except for the large health care system based there that frequently brought doctors to town. Her father was a pediatrician who showed her how to stitch up the pigs, sheep, and horses on their property when they were hurt and took her along on house calls for neighbors who couldn’t afford an office visit. All four of her siblings followed him into medicine, but she says, despite the prominence of the profession in her upbringing, she “never felt drawn to it.”

After graduating from the University of Pittsburgh, she stayed at her alma mater to work as an admissions counselor, but eventually decided law school was the right path. As she considered where to apply, Duke’s location was a draw; the McKinleys had vacationed at the Outer Banks and Rose even spent one college summer working at the Ocracoke Lighthouse. She also liked that Duke was small, like her hometown. “I got the sense that if I came here, I would get to know who my classmates were, and that’s certainly held true, that’s still my favorite thing about the Law School,” she says.

Getting to know her professors has been equally valuable, she adds. Faculty were especially helpful when she took over as DBA president, advising her and serving as sounding boards for her ideas — and she had lots of ideas. Among the first, and perhaps most noticeable, was the purchase of a Ping-Pong table for the Blue Lounge, which students have put to nearly continuous use since its arrival.

“I think the Ping-Pong table has been a great example of Duke’s culture at its best,” says McKinley, who joked that it honored alumnus Richard M. Nixon ’37 and his “Ping-Pong diplomacy” with China in the early 1970s. “You can walk past the Blue Lounge now at basically any time of day and there are people playing Ping-Pong, and it’s not from one social group. There are LLMs playing against 2Ls and 1Ls playing against 3Ls, and that’s been a fun thing to see.”

McKinley embraced the wide and varied roles the DBA plays as both a student bar association and the Law School’s student government as well as the opportunity to connect more deeply with her fellow students. She studied in Star Commons rather than the library to ensure she was accessible and hosted regular get-togethers at the Durham bungalow she shared with classmates Paul Gray and Paul Ream. She revived the DBA’s monthly Thursday afternoon gatherings, partnering with other student organizations to increase turnout and bring students together. And she successfully lobbied the university to let 3Ls keep their parking spots in the nearby Chemistry lot when a new garage opened farther away.

But her community-building skills faced their biggest test following the presidential election on Nov. 8. With the surprise outcome reverberating the next morning, McKinley invited students, no matter their political persuasion, to gather for donuts and coffee and talk about their reactions. The event marked the beginning of constructive conversations that might not have happened after such a divisive campaign, Buell said: “Rose sought to unify the student body and encourage dialogue.” And while McKinley makes no secret of her politics — she organized 100 students to travel to the Women’s March on Washington the day after the inauguration of President Trump — she notes with pride that at the annual D.O.N.E. awards, which are given by the DBA, organizations from opposite ends of the political spectrum, the Federalist Society and the American Constitution Society, were honored for Outstanding Student Organization Leader and Outstanding Contribution to Civic Discourse, respectively.

“Even in stressful times, people still care about each other here because we are a community,” she says. “Interacting with people when they were trying to accomplish something and hopefully being a resource to them gave value to my experience here but also reinforced this belief that getting to know who my classmates are has been the most valuable part of my experience. It’s made me realize that very simply, people matter.”

The recipient of the Caroline Gottschalk ’90 Scholarship, McKinley has shown particular interest in the status of women during her time at Duke, whether at the Law School, in the legal profession, or in the technology industry she will be advising as an associate in the Palo Alto, Calif. office of Cooley LLP beginning this fall. In her second year, she and a group of other women leaders of student organizations began meeting every other week to talk about their roles and how they could support one another and mentor others. She has also been involved in an effort to build a women’s network within the alumni community, and she’s hoping to organize a group of her classmates who are staying in Durham to study for the bar to get together and discuss books on about gender topics.

“Her energy level is just amazing,” says Lila Hope ’02, a Cooley partner who met McKinley at the ESQ event during McKinley’s first year at Duke and had a chance to see her in action as a 2L summer associate at the firm. “She’s enthusiastic and passionate about the fundamentals of law practice, and she possesses a rare combination of work ethic and intellectual acuity.”

Silicon Valley would seem to be an ideal landing spot for McKinley, a member of the second class of students to graduate with the dual JD/LLMLE. As a first-year student in the program, she got a taste of the entrepreneurial life through her work with a start-up incubator and an emerging health technology company in Durham. In her second year, she worked in the Start-Up Ventures Clinic, counseling early-stage companies on entity formation and other transactions, and as a 3L, she was student supervisor for the Access Tech Tools initiative, in which students developed apps to assist underserved clients in a variety of practice areas.

“Before I came to law school I knew I wanted a career that made me feel like I was advising people and helping people and I saw the law as something that put you in a position to do that,” she says. “And I think in particular that’s why transactional work has stood out to me, because it’s sitting down with people and understanding what they’re trying to do and where they’re trying to get and then advising them on how to structure the deal to get there. I see that as something that’s been consistent throughout my life.”

McKinley says Cooley, which is known for its informal and collaborative culture and has been named to Fortune’s 100 Best Companies to Work For list, reminds her of the collegial environment at Duke. She says she’s excited for the challenge of being an associate there and working with companies at the forefront of technological change, and remains committed to the goal she has held since high school: to be an effective member of her community.

“And whether that means being on the school board or being on local city council or running for senator one day, I feel like Duke Law School has given me the sort of critical thinking abilities and the ability and desire to question things … that will make me a good citizen,” she says. “Or I could come back to work in student affairs and get more Ping-Pong tables.”