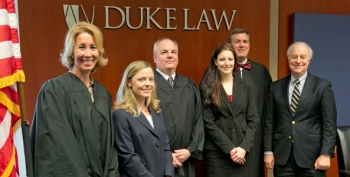 A panel of federal court judges awarded Margaret Anderson ’18 the Hardt Cup after the final round of Duke Law’s annual moot court tournament for first-year students. The judges praised Anderson and Taylor West ’18 for their advocacy and poise.

The students argued opposing sides of Bell v. Itawamba County School Board, a case involving free speech and public schools. Many of the judges’ questions also involved the landmark 1969 Supreme Court decision in Tinker v. Des Moines Independent Community School District, which established that schools may regulate student speech causes or can reasonably be forecast to cause “substantial or material disruption.”

West argued on behalf of Taylor Bell, a high school student who, after hearing from female friends that two coaches at his high school were sexually harassing students, recorded a rap song accusing the coaches of harassment and uploaded it to Facebook and YouTube. The song, which included language threatening the coaches, was recorded off school grounds using no school equipment. When the school’s administration discovered the song, Bell was suspended and sent to an alternative school. He sued the Itawamba County School Board, claiming a violation of his First Amendment rights.

After a district court upheld the school’s decision to suspend and transfer Bell, he appealed to the U.S. Court of Appeals for the Fifth Circuit which reversed the district court’s decision, holding that even if the school’s ability to punish speech could be extended off-campus, Bell’s song caused no substantial disruption. However, an en banc panel of the Fifth Circuit later reversed the initial appellate opinion on the grounds that the song’s threatening content constituted a potentially substantial disruption. The Supreme Court denied certiorari in February, a fact noted by Whitney.,

“This was a tough problem,” he told the students. “The Supreme Court has avoided it, but the two of you had to take it on, and you took it on extremely well. There are huge public policy questions on both sides, and you handled those extraordinarily well.”

Anderson and West addressed questions about the line between artistic expression and genuine threat in Bell’s lyrics, and contended with the difficulty of assessing a school district’s speech policies in the age of the internet and social media.

“Mr. Bell is a rap artist who was simply using a creative outlet to express legitimate concerns he felt about his school,” West said when questioned about the threatening content of the song. “Rap as a genre frequently, if not categorically, carries with it profane language and violent imagery.” She argued that the school acted in a fashion that showed that they were more concerned about the allegations of sexual harassment and ensuing reputational damage than about actual harm resulting from the lyrics.

Anderson countered that the specific threats made against coaches at the school were exactly the kind of speech that school policies should cover.

“This is a case about a school’s need to act swiftly to ensure the safety of all of its students upon learning that one student publicly posted violent and explicit threats against two named teachers, and encouraged his classmates to join him,” she said.

Anderson argued that the prevalence of social media and internet platforms like YouTube make the distinction between on-campus and off-campus speech less meaningful. “The speech was published off-campus, but was visible on campus,” she said.

West said that modern communications platforms, and the extent to which people, especially young people, maintain an extensive online presence, made it more important to keep schools from punishing student speech. “The internet cannot be the sole reason upon which schools may regulate student speech,” West said. “Today’s students have their whole lives online.”

The competition was “extremely, extremely close,” said Hughes . He told Anderson and West that they equaled or surpassed many of the lawyers he sees in court.

Rosenberg  said she was impressed by the students’ ability to stay on message under heavy questioning.

“You both were very poised, and you handled the questions beautifully,” she said. “The fact that you could answer those questions and get right back on track and not lose a step at all was really remarkable.”

The Hardt Cup Tournament was established by members of the Class of 1964 in memory of their classmate, A. Lee Hardt, who died in 1962, just after completing his first year. The tournament begins with the oral advocacy component of the first-year Legal Analysis, Research, and Writing (LARW) curriculum, which is coordinated by the Moot Court Board. Eighty-seven first-year students elected to participate in the 2016 tournament after the competition’s mandatory first round.