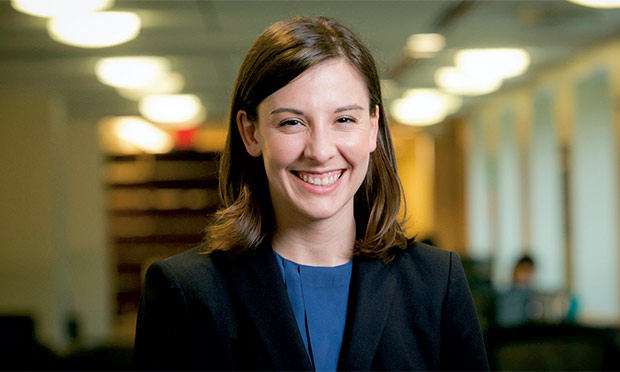 With her JD in hand and nearing the finish line on her PhD in history, Anna Johns finds it hard to believe that she once planned to study medicine.

She entered Wellesley College on a pre-med track, intending to follow her mother into medicine. But after taking her first history course, Johns decided to switch gears. “It was Bread and Salt: An Introduction to Russian History, and I was just in love,” Johns says. “I pretended to be pre-med for one more semester. I took chemistry, but I decided my heart just wasn’t in it.”

The native of Birmingham, Ala., graduated with a bachelor’s degree in history and French cultural studies in 2009, but found it impossible to land a job. “It was a terrible time to graduate from college because the U.S. economy was a mess. I felt really sheepish about moving home without a job.”

At that point, she had no interest whatsoever in the practice of law, but her father persuaded her to interview with one of his former law partners for a position at Maynard, Cooper & Gale. She was hired as a paralegal, and that position furthered her passion for research and laid the foundation for her career.

Under the mentorship of a former justice of the Alabama Supreme Court, Johns worked with a team defending the state of Alabama in a class-action lawsuit brought on behalf of public school children. The plaintiffs alleged that the state property-tax system had been put in place with a racially discriminatory intent in order to deprive black school children of an equal education. In addition to participating in drafting the state’s motion for summary judgment, Johns researched property tax laws at the state archives, looking for evidence supporting the plaintiffs’ claim of racially discriminatory intent in the drafting of the state’s property-tax laws.

“I never found it — which made me feel better about my home state — and the state won,” Johns says. But spending time mired in information about poor educational outcomes of Alabama kids, especially in the poorest counties across the state, sparked her interest in Teach For America, in spite of her longer-term plan to go to law school.

“The kids didn’t win,” she says. “I felt like the substance of what I was doing at the law firm had a lot to do with education, and that forced me to confront the extremely unequal access to a good education in America.”

Johns taught fourth and fifth grades, respectively, in San Antonio, Texas, for two years. She says she would have stayed teaching longer, had she not been admitted both to Duke Law (her first choice) and to the university’s PhD program in history (also her first choice). “It took that to tear me away from my kiddos after my second year.”

The James B. Duke Scholar spent her first year at Duke laying the groundwork for her PhD, happily “deep in the history mud.” She then took a leave of absence to focus solely on law. “It was awesome to just be a 1L,” she says. “I got to build friendships and put down roots, which I don’t think I would’ve been able to do if I had tried to do both at the same time.” That’s exactly what she has done for the past yearand- a-half. “Each semester was the craziest semester I’d ever had, only to be topped by the semester that was coming just down the line,” she says of juggling course loads and extracurriculars for both programs. At Duke Law Johns has served as president of the Moot Court Board, articles editor for Duke Law Journal, and co-president of the Volunteer Income Tax Assistance program, which prepares tax returns for low-income Durham residents.

Johns says she began to appreciate and was able to better understand just how those different bodies of knowledge connect during her second year of law school when she took both an international law course with Laurence Helfer, the Harry R. Chadwick, Sr. Professor of Law, and a graduate-level course on regulation and political economy. At one point, discussion in both classes turned to the collapse of a commercial building in Bangladesh. “In Professor Helfer’s class, we were talking about international trade flows and, in the wake of the Rana Plaza disaster, corporate actions that try to address worker safety issues in Bangladeshi factories,” she recalls. “And then in my history class we were talking broadly about corporate involvement in creating public policy. I started seeing all of these connections between the two different programs. The approaches are different, but the problems are similar.”

She is highlighting those connections in her PhD dissertation, which expands on an independent study with Professor Thomas Metzloff on the history of consumer class actions and how they have been used as tools for consumer protection. After spending the summer of 2016 as a summer associate for Williams & Connolly in Washington, D.C., Johns will return to Duke “writing with ferocity” to finish her PhD. Johns will then clerk first for Judge Allyson Duncan ’75 on the U.S. Court of Appeals for the Fourth Circuit in Raleigh and then for Judge John D. Bates of the U.S. District Court for the District of Columbia. 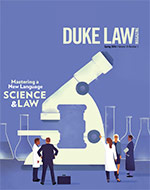