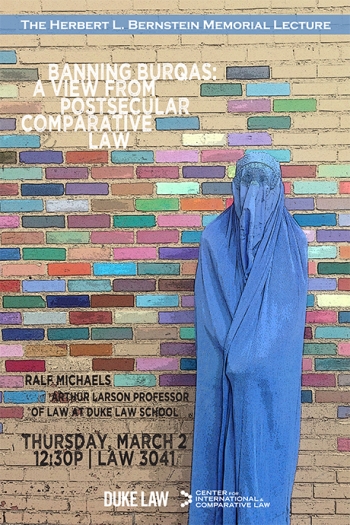 Ralf Michaels, Arthur Larson Professor of Law at Duke Law School, will deliver the Annual Bernstein Lecture in Comparative Law titled "Banning Burqas - A View from Postsecular Comparative Law." When France banned Islamic face veils in 2010, many considered this a French eccentricity. Now more and more countries are enacting, or at least considering, similar legislation. Taking the perspective of postsecular comparative law, the lecture looks at the ways in which Western legal systems understand and construct religious law and their own relation to it.  Lunch will be provided on a first-come, first-served basis. Co-sponsored by the Center for International & Comparative Law and the Office of the Dean.

Ralf Michaels is an expert in comparative law and conflict of laws, and a professor at Duke University School of Law. His current research focuses mainly on three issues: the role of domestic courts in globalization, the role of conflict of laws as a theory of global legal fragmentation, and the status and relevance of law beyond the state.  He has authored numerous articles on all three topics.

Michaels is the editor or co-editor of two special volumes of the American Journal of Comparative Law: "Beyond the State? Rethinking Private Law", 2008 (also published as a book) and "Legal Origins", 2009, as well as a book and a journal issue on conflict of laws: Conflict of Laws in a Globalized World (2007); Transdisciplinary Conflicts, Law and Contemporary Problems, 2008.

Michaels has been a visiting professor at the Universities of Panthéon/Assas (Paris II), Princeton, Pennsylvania, Toronto, and the London School of Economics. He has also held senior research fellowships at Harvard and Princeton, as well as the American Academy in Berlin and the Max Planck Institute for Private Law in Hamburg. In 2015, he gave a number of lectures on private international law at The Hague Academy for International Law.

Michaels studied law at the Universities of Passau and Cambridge, UK. He is married and has three daughters.