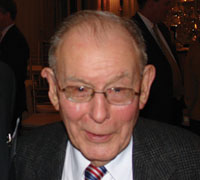 After graduating from Davidson College in 1930 with majors in economics and political science, Bill McGuire set out to find the most economical place in North Carolina to attend law school during the Great Depression. The Franklin, N.C., native enrolled for classes in Chapel Hill, but his plans soon changed.

“During that summer at home, Dr. [Walter] Lingle, who was the president of Davidson at the time, got a call from Duke saying they were offering scholarships, $500 a year, and he wanted to know if I wanted it,” recalls McGuire, who will turn 100 on July 26. “I said, ‘I sure do.’ That took me to Duke.”

McGuire’s arrival in Durham in 1930 coincided with the opening of the University’s West Campus. He attended classes in the Law School’s new stone building where, come springtime, he and his classmates faced a unique distraction.

“While I was there that first year I saw all those oak trees in the quadrangle being set out. They were planting the grass in the quadrangle, and they had a crew doing it,” McGuire says. “There was no air conditioning in those days, so the windows were open. The foreman had a real good voice and would sing and all the men would join in the chorus.

“That was the time of our Real Estate Law course,” he adds. “We had to try and learn real estate law and listen to those fellas out there planting grass and singing good songs with good rhythm.”

McGuire didn’t let good music distract him from his studies and Law School activities. He became the first president of the Duke Bar Association and helped establish the Duke Bar Association Journal, which continued publication until 1942. McGuire also worked in the library during each of his three years at the Law School. His only real break came on Saturday nights when he attended the weekly movie that was shown on campus.

“The rest of the time we were working, literally,” he says. “Law school required you to devote your attention to it.”

Particularly challenging was Constitutional Law with Professor Douglas B. Maggs, who McGuire says “had a long reputation at Duke Law School” and “taught us as tough as he could.”

Ultimately his hard work paid off. McGuire joined Duke Power Company as assistant general counsel after graduation. He eventually became president. The company’s revenues grew from $143 million when
McGuire took over as president in 1959 to $386 million when he retired in 1971.

McGuire has served as a trustee of the The Duke Endowment, one of the nation’s largest private foundations, and as a director for Duke Power Company; the Charlotte Branch of the Federal Reserve Board; the Edison Electric Institute; and the Research Triangle Foundation. He also served as chairman for Hatteras Income Securities; the National Electric Reliability Council; and the Carolinas-Virginia Nuclear Power Associates.

McGuire was inducted into the North Carolina Business Hall of Fame in 1992.

McGuire joined with his wife, Grace Robinson, to establish the William B. and Grace R. McGuire Scholarship Endowment Fund in 1993. He also is a member of the Barrister Society.

To honor McGuire’s impressive career in business and his status as the Law School’s oldest living alumnus, the Duke University Board of Trustees approved a request to establish the William B. McGuire Professorship of the Practice at Duke Law School. This new position will enable the school to hire an outstanding practitioner and academician to enhance the school’s professional skills curriculum.