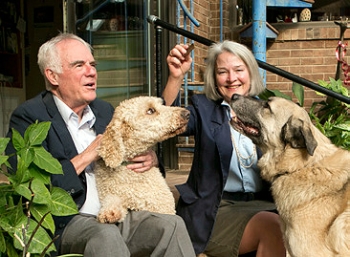 A visitor to the Chapel Hill home of Professor Bill Reppy and Juliann Tenney ’79 can get a sense of their personal interests with a quick look around. A baby grand piano that occupies a prominent position — with an organ close by — testifies to Reppy’s considerable talent at the keys. Their passion for animals is unmistakable, with three large rescue dogs vying for attention: Sean, a golden retriever; Max, a standard poodle; and Puck, an Anatolian shepherd. Bicycles leaning against the second-story catwalk hint at the couple’s shared love of outdoor sports, as does the indoor lap pool. (Reppy quietly shares the fact that his wife enjoyed a successful competitive swimming career as a teenager, and now focuses on cycling and tennis.)

The couple’s deep ties to Duke Law School, where Reppy is the Charles L.B. Lowndes Professor Emeritus of Law, are also in evidence. A ginko tree that sits in a small clearing off the deck was given to Reppy by a group of students in the ’90s. Nearby is a custom-made iron bench with an animal and bird motif, a gift from his faculty colleagues and friends when he retired from teaching in 2010.

“I had a wonderful job, wonderful students, and wonderful colleagues over more than 40 years at Duke,” said Reppy, who still pursues scholarship in the areas for which he is renowned: community property and animal law.

He recalled teaching such courses as Property, Matrimonial Property, and Legal Writing when the faculty was relatively small. “There were periods where I must have taught more than half of the graduating class,” he said, adding that he has stayed in touch with many of his students. Tenney’s connection began with the “rich environment” she found at Duke Law during her student days.

“In law school you are taught and led by the faculty, but you also learn from your classmates,” said Tenney, who also spent a significant portion of her career at Duke, directing compliance as associate dean at the School of Medicine before becoming the first director of Duke’s Institutional Ethics and Compliance Program. “I found that Duke was strong in both respects: It had an excellent faculty and an excellent student body of colleague-peers that also helped us all learn.”

Reppy and Tenney have recently made Duke Law the beneficiary of a $1 million charitable remainder unitrust, or CRUT. The gift reflects a desire to use their resources effectively and in a way that shows their appreciation for the good fortune they have enjoyed as members of the Duke community, said Tenney, who now oversees all institutional research compliance and HIPAA privacy matters at the University of North Carolina at Chapel Hill, her undergraduate alma mater.

The trust gives Reppy and Tenney a quarterly income for life “and ultimately provides a very generous and important legacy for Duke Law School,” said Mike Sholtz ’88, senior development counsel in Duke’s Office of Planned Giving — and a former student of Reppy’s — who worked with them in setting it up. The trust will be managed by the same investment managers who oversee Duke University’s endowment, DUMAC Inc., with the day-to-day administration being handled through Duke’s Office of Gift Planning, he said.

Sholtz called it a privilege to work with Reppy and Tenney on their retirement and charitable gift planning.

“Bill Reppy was the first faculty member I met upon arriving at Duke Law in 1985,” he said. “I was blessed to have a double helping of Bill, as he was both my first-year small section professor and legal writing instructor. Bill’s love of the profession, his students, and Duke Law has always been pronounced. He was an inspiration, mentor, and friend during my formative years, and so he remains. I celebrate Bill and Juli’s commitment to Duke Law as they help to preserve and build on the Law School’s excellence for future generations.”

“Bill and Juliann have deep ties to Duke Law School and already have made a huge difference in the life of the Law School,” said Dean David F. Levi. “This wonderfully thoughtful and generous gift is another way in which they continue to give back and help make us better able to fulfill our mission of excellence and service.”

For Reppy, who in 2010 was honored by the Law Alumni Association with its A. Kenneth Pye Award for excellence in teaching and compassion toward students, the gift is just one piece of a long legacy at Duke established over decades as a scholar and teacher. But it’s one the couple felt called upon to make “as beneficiaries” of the Duke Law community, said Tenney.

“Tuition doesn’t come anywhere near covering the costs of a Duke education. And I think anybody who’s been a beneficiary should feel called upon to remain an active part of the community.”