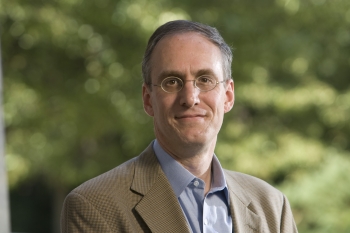 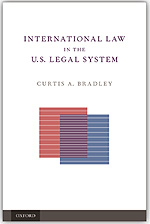 Bradley also examines how U.S. governmental structures, at both the federal and state levels, affect the nation’s interactions with international law, including when it agrees to international law commitments and how it implements them, both through the courts and outside the courts.

Bradley, who was recently appointed as one of eight reporters for the American Law Institute’s Restatement (Fourth) of Foreign Relations Law of the United States, told Duke Law Magazine that he targeted the book broadly to scholars, students, and practitioners both inside and outside the United States.

Professor Bradley:  The first chapter offers an overview of the U.S. legal system and some of the key doctrines that U.S. courts tend to apply in these cases, including a variety of doctrines that limit the role of courts in the foreign affairs area, which explains why you can’t always find the answers in the courts; sometimes you have to find the answers in the executive branch materials or in the actions of Congress.

The book is not an attempt to advocate my views about where the law should be.  In areas where the law is unsettled, I express my opinion about what I think the better view in the debate is — and point out that I am expressing my own view.  But my intent is to describe where the law seems to be right now, where the courts have been going, and where Congress and the executive branch seem to be on certain issues.  I want readers to make their own judgments about whether the law should evolve further.   This is somewhat like a Restatement approach.

Duke Law Magazine:  You cover a lot of areas of controversy throughout this book.  To what extent does the United States deserve its reputation for being somewhat isolationist and reluctant to embrace international law?

Congress has, in modern times, been more resistant on some international law issues than the executive branch has been; the executive branch interacts with the rest of the world more directly than Congress does.  And Congress has occasionally had concerns about the United States giving up sovereignty to international institutions.  Congress also sometimes goes the other way and authorizes, for example, broad suits against state sponsors of terrorism and, in that sense, tries to vindicate certain international rights of the victims.  The executive branch often has problems with those congressional actions because they can trigger complaints from other countries that we’re being too aggressive in allowing lawsuits.  So the executive and Congress often spar over those issues as well.

DLM:  How receptive are the courts to international law, broadly speaking?

The courts have sometimes been less deferential in human rights cases.  One example I discuss is litigation under the Alien Tort Statute, such as in Kiobel v. Royal Dutch Shell Petroleum Co., a case currently pending before the Supreme Court.  It’s a suit against multinational corporations for allegedly facilitating human rights abuses in Nigeria.  There have been a number of cases in recent years brought against companies connected to human rights-abusing countries.  The executive branch has expressed concern that this litigation is not in the country’s foreign policy interests, and some European countries have complained because it’s sometimes against their corporations.  The courts haven’t always listened to the executive’s concerns.  But that’s really an anomaly; courts have been reluctant, for example, to enforce treaties unless they have pretty clear indications that the political branches wanted them to give effect to the treaty.

Another high-profile issue in the courts is the extent to which officials of foreign nations have immunity from being sued in American courts.  The Fourth Circuit recently issued a ruling in Yousuf v. Samantar, finding that a former high-level Somali official did not have immunity from damages under the Torture Victim Protection Act of 1991and the Alien Tort Statute.  The court went further than the executive would have liked in limiting immunity; it will have reciprocity implications, because U.S. officials would like to have immunity when they travel abroad.  But in other cases courts have been more willing to give immunity, and they have deferred to the State Department on the immunity question in still others.  So nobody knows how that area of law is going to shake out.

There are a lot of other areas of international law, such as the application of extradition treaties, that are routinely applied in U.S. courts without a lot of controversy.  There’s more controversy in an area like human rights partly because it has more foreign policy consequences.

DLM:  You cover customary international law — one of your areas of scholarly expertise — extensively.

Bradley: One reflection of that is the Supreme Court is addressing these issues much more frequently than it has in the past, and the lower courts are also getting more of these cases. And there is a wide range of international law coming into the courts, with a mix of the public international standards, such as issues relating to war and Guantanamo, and private international law treaties such as The Hague Convention on Child Abduction that comes up a lot in family law cases when divorcing parents want to take children out of the country.  And there are other so-called private international law treaties that courts are now increasingly seeing.  It reflects globalization and the fact that more people are traveling all over the world and we’re connected to other countries more significantly.

I emphasize in the book — and this is based partly on my time as counselor in the Office of the Legal Adviser at the State Department — that if you only looked at the courts you’d be missing important legal issues that come up outside of the judiciary.  State Department lawyers regularly address issues that don’t get into the courts, but involve difficult questions of international law, the nature of U.S. obligations under international law, how the U.S. will interact with international institutions, and the extent to which the executive branch is obligated to follow international law even if the courts will not enforce the obligations.  Some of those issues have generated huge debates within the executive branch, such as those that arose during the Bush administration over the meaning of U.S. obligations under the Torture Convention with respect to interrogation of detainees, and the nature of the obligations entailed by the Geneva Conventions and whether they applied in the conflict in Afghanistan.  There were very significant debates within the executive over those issues — between the State Department lawyers and lawyers in the Justice and Defense Departments.  It can therefore be too simplistic to describe the “executive branch’s position” on international law; you really have to get down and look at different components of the executive.

DLM:  What role do the states have in foreign affairs?

Bradley:  There’s some debate as to whether states should have any role in foreign affairs.  But they do have a role – for example, most criminal cases in the United States are handled by the states, not at the federal government level, and many of these cases involve non-U.S. citizens.  Those cases are inherently international in the sense that they involve individuals who are not necessarily based in the U.S.

Also, to think about how international law applies in the United States, you have to take account of our federal structure, which is relatively unique in that we have separate governments and court systems at the state level that have a large share of jurisdiction over different cases in the U.S. and they play a big role in certain areas of law, like criminal law and family law. Inevitably, and increasingly, state courts and state governments interact with international law.

And then there’s the more general issue of preserving U.S. federalism in an era of globalization.  Are there limits on what the national government can do in the international area because of states’ rights or because of the interests of the states?  That has long been a matter of debate and is not a settled issue even today.