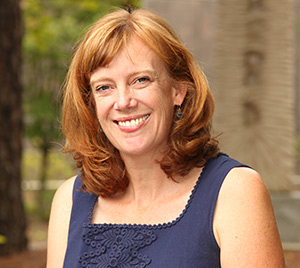 Katharine B. Buchanan T’92 has been named associate dean for alumni & development at Duke Law School.

Buchanan, who has served as interim associate dean since March, has nearly 20 years experience in development and management roles. Since joining Duke Law as director of development more than a decade ago, she has played a leading role in fundraising efforts, including the school’s participation in the Duke Forward campaign. The campaign, which will conclude in June 2017, has raised $101.4 million for faculty and student priorities, more than any in the Law School’s history, and 119 percent of the initial goal of $85 million.

“I am so grateful for the opportunity to serve as associate dean,” Buchanan said. “It is a special honor to work with Dean Levi, along with an outstanding group of Duke Law colleagues and an amazing constituency of alumni and friends.  Together, we have been a part of a rise in quality and reputation of Duke Law School, and we have gained significant forward momentum during the campaign – momentum that we will keep fueling to carry us to even greater heights. The alumni & development team and I are eager to explore additional ways to harness the considerable energy, interest, talent, and support that our alumni and friends have to offer for the School’s benefit.”

Buchanan joined Duke Law in 2004 as director of development, and was promoted to assistant dean of development in 2006. A native of Colorado, she earned a bachelor’s degree in public policy studies from Duke and a J.D. from the University of Virginia School of Law. Prior to joining Duke, she practiced estate planning with Walker Lambe Rhudy Costley &Gill, PLLC in Durham.  She previously served in development roles at Virginia Tech and the University of Colorado.

In addition to her own degree, Buchanan has strong family ties to Duke. Her mother, Dale Bernard, is a 1966 graduate of the Women’s College. Her father, Dan Bernard, was a member of the Duke Law class of 1967, and she and her family have established a scholarship fund at the school in his memory. Her husband, Phil, is assistant vice president for gift planning for Duke University.  She has served on her reunion and leadership gift committees and as a regional admissions interviewer for the Duke University Alumni Advisory Committee.

“We are delighted that Kate will be assuming the leadership of our already superb Alumni & Development Office.  She is well known at the Law School for her creativity, enthusiasm, and dedication to Duke.  She is also much beloved by the many alumni she has worked with over the years.   As a lawyer herself, she understands the needs and aspirations of a great law school and its graduates.  We are so fortunate that Kate has agreed to take on the leadership role, and I am looking forward to working with her.”