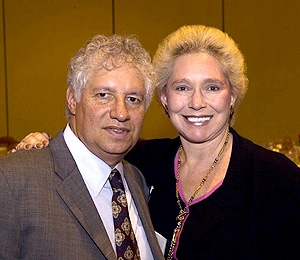 Duke Law alumni Candace Carroll ’74 and Leonard Simon ’73 have committed $1.25 million toward the creation of an endowed professorship in law, announced Dean David F. Levi. The gift advances the Law School’s efforts to raise $85 million as part of Duke’s $3.25 billion Duke Forward fundraising campaign, which includes investments in core faculty among its priorities.

The gift marks the third time donors have taken advantage of a matching gift fund created by Stanley ’61 and Elizabeth Star in 2010 to spark new support for faculty. Jeffrey P. Hughes ’65 and his wife, Bettysue C. Hughes WC’65, established a professorship in 2011, and Mark Fishman ’78 and his wife, Jill, created a professorship in September 2012 using funds from the Star Challenge.

As longtime supporters of the Law School and the university, Carroll and Simon have directed their philanthropy in ways they hope will advance the school and enhance opportunities for students. Creating the Carroll-Simon Professorship in Law is a natural extension of those efforts, they say.

“The faculty is the most important aspect of a school,” says Carroll. “I have done some teaching, and I know how hard it is. I also remember how good my professors were when I was in law school. I remember sitting in Professor [William] Van Alstyne’s class; much of the time, you couldn’t keep up with him. But on those days that you could, you could actually feel your mind expanding. It’s an amazing experience to be in the classroom with teachers of such intellect and skill. Faculty of that quality are what sets Duke Law apart.”

“Len and Candy and are such wonderful graduates of Duke Law,” said Dean Levi. “Both of them have had very successful lives in the law both in practice and as civic leaders. And both of them do so much for our Law School. Their first major gifts were to fund student scholarships and summer public interest fellowships. These gifts have made a huge difference to the students who have been helped. With this further major gift, Len and Candy help us to maintain a strong faculty of preeminent law scholars who excel in teaching and in developing those ideas that change and advance our understanding.

“We thank Len and Candy for their leadership, for giving back, and for their service to Duke Law and the legal profession.”

A life member of the Duke Law Board of Visitors, Carroll is an appellate practitioner with more than 30 years of experience handling appeals in the federal, state and bankruptcy appellate courts. She has practiced with the law firm of Sullivan Hill Lewin Rez & Engel in San Diego, Calif., for 30 years.

An accomplished teacher in her own right, Carroll has taught seminars in Advanced Legal Writing at Duke Law and the University of San Diego School of Law, where she currently supervises a Ninth Circuit Legal Clinic. In 2009, she received Duke Law’s Charles S. Rhyne Award, given to a graduate whose career as a practicing attorney has demonstrated the highest standards of professionalism and personal integrity.

Simon specializes in complex litigation in the federal courts, including class actions in the securities and antitrust fields. He is of counsel with Robbins Geller Rudman & Dowd in San Diego, where he also has handled a substantial number of significant complex appellate matters, arguing cases in the United States Supreme Court, several federal Courts of Appeals, and several California appellate courts.

Simon also has spent considerable time at the head of the classroom, teaching courses at Duke, the University of San Diego, and the University of Southern California law schools on complex litigation and sports and the law. He has lectured extensively on complex litigation in programs sponsored by the American Bar Association Section of Litigation, the Practising Law Institute, and ALI-ABA, and at the UCLA and University of San Diego law schools and Stanford’s business school.

Simon has also maintained a lifelong interest in sports. In addition to teaching courses on sports and the law, he was recently appointed to Duke’s Athletic Council by President Richard Brodhead. He also sits on the board of the San Diego Padres and co-owns a minor league baseball team.

Loyal donors and volunteers, Simon and Carroll are members of a committee charged with leading Duke Law’s recently announced $85 million fundraising campaign. Students will recognize their names from the public interest fellowships they established in 1998 to provide summer grants for students who work in non-paid public interest positions during law school; 10 Duke Law students benefited from Carroll-Simon fellowships in summer 2012 alone. The couple also has established the Carroll-Simon student scholarship and provided support to numerous other initiatives.

Carroll and Simon met as law students at Duke, and both recall their time on campus fondly. Carroll, the recipient of a full scholarship, was one of a small number of women in her class. While she remembers that “it was harder for women” at that time, she felt immediately at home at Duke. “It was the first place I had ever been where if you were a fairly loud, smart, opinionated woman who put your hand up all the time, you were welcomed.”

Simon recalls Duke as a place where he was given an excellent foundation for his legal career and also developed close relationships with wonderful classmates and faculty member that have served him well ever since.  “Life has been good to us since we left Durham armed with a Duke education and Duke degree, and it is only natural to share some of our good fortune with the school and its current and future students,” Simon said. “Duke Law should always have funds for scholarship students like Candy and great professors like those who taught us.”