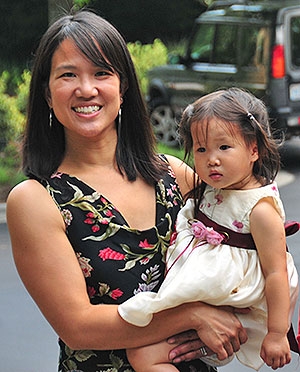 Mae Wu loves her job at the Natural Resources Defense Council (NRDC) where she works to remove toxic chemicals from consumer products, improve pesticide regulation, and protect the quality of drinking water. Her husband, she jokes, is sometimes less enthusiastic.

“When I go home and tell him we can’t eat rice anymore because it contains traces of arsenic, he rolls his eyes and tells me how much he hates my job,” she says.

Wu, a program attorney with the NRDC’s Health and Environment Program in Washington, D.C., blogs regularly about such issues as pesticide spraying on public waterways, inaccuracy in food labeling, and the dangers of rat poison pellets to children.  She focuses much of her advocacy on the regulation of substances that threaten widespread public harm through their pervasive use, such as the chemical triclosan, a key ingredient in antibacterial soaps and cleansers.

While everyday exposure to triclosan has been shown to encourage growth of harmful bacteria, damage the beneficial gut bacteria, exacerbate asthma, and interfere with hormone functions, Wu wrote in a blog post, the chemical is not yet regulated by the Food and Drug Administration (FDA). She and her NRDC colleagues have asked the agency for an official ruling on its use as an ingredient in antibacterial products.  They have a wide range of legal tools at their disposal on this initiative and others, from filing public comments with the agency, launching informational campaigns, or even suing the FDA.

“We advocate for the environment in whatever way makes sense,” Wu says. Her varied routine makes that clear: One day she might be lobbying for action on Capitol Hill, another may find her at a meeting of the Environmental Protection Agency’s National Drinking Water Advisory Council, of which she is a member, and still another may be taken up with case development and filing public comments.

Wu began planning a career in environmental advocacy when she visited Taipei as a 12-year-old and found herself wiping black soot out of her nose. While studying chemical engineering at Rice University, she spent summers researching toxic chemicals at the National Institute for Environmental Health Sciences and studying air pollutants at the trade association for chemical engineers.  An environmental law class and an internship with a plaintiff’s attorney inspired her to go to law school.

“The Nicholas School [of the Environment] was brand new when I got to Duke,” Wu says. “There were only two or three law students interested in environmental law, and a slightly larger group interested in public interest work. It was a small community, but very warm and supportive.” Her experience with that group ended up having a key impact on her career.

Having joined a large California law firm following her graduation in order to pay off student loans, Wu says she lost sight of her environmental goals while working long hours in a general litigation practice. But in her third year at the firm, she received a letter in a Duke Law envelope.

“It said, ‘Quit whatever you’re doing! You need to work in environmental law. Now!’ and was dated five years earlier,” Wu says. She had written it – to herself – during a public interest retreat headed by Duke Law’s former Associate Dean for Public Interest and Pro Bono Carol Spruill, who later mailed it. “That letter really woke me up,” says Wu, who subsequently left her firm to focus on water contamination issues in a smaller practice.

Convinced that policy work would allow her to have maximum impact, Wu obtained a degree in environmental policy at Cambridge University in England. She then landed her “dream job” with the NRDC on a tip from a former employer.

“As an environmental law student, every case you read is the NRDC vs. the EPA or some other agency,” she says. “I saw it as the gold standard.”  Wu describes NRDC co-founder John Adams ’62 as a role model.

Grateful for the letter that helped redirect her career, Wu has returned often to Duke to speak with students about her work and about public interest law.  She hopes to return more frequently with NRDC colleagues to work on environmental issues in North Carolina with Duke Environmental Law & Policy Clinic faculty.  Both Clinical Professor Ryke Longest and Senior Lecturing Fellow Michelle Nowlin JD/MA ’92 have consulted with Wu on issues related to factory feedlots, and her work has benefitted theirs.  Going forward, the collaboration may take the form of a joint working group.

Wu says the initiative to address such issues as the misuse of antibiotics on factory farms would also help her fulfill a long-ago promise.  Wu grew up in Raleigh, and while interviewing – successfully – for a spot at the prestigious North Carolina School of Science and Math at the age of 16, she was asked “‘why North Carolina taxpayers should pay’” for her attendance. Wu answered that one day she would improve the quality of life in North Carolina by working on the state’s environmental issues.

“I’m hoping that a partnership with Duke Law will be my chance to give back,” she says. – Caitlin Wheeler ’97