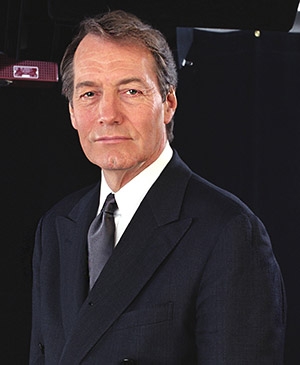 Journalist and talk show host Charlie Rose ’68 T’64 will address members of Duke Law School’s class of 2016 at their May 14 hooding ceremony.

“Through his intelligence, wit, and unique style, Charlie Rose has established a singular presence in our public conversation,” said Dean David F. Levi. “We are excited to welcome such a distinguished alumnus to speak to this year’s graduating students.”

Also speaking will be Richard Lin and Dai Tajima, who were selected by their fellow students to represent the graduating JD and LLM classes, respectively. Judge Johnnie B. Rawlinson of the U.S. Court of Appeals for the Ninth Circuit will speak on behalf of federal, state, and international jurists completing the two-year Master of Judicial Studies program.

Rose is anchor and executive editor of “Charlie Rose,” a nightly one-hour program that airs on PBS and Bloomberg Television, and the newly launched “Charlie Rose: The Week.” Rose also co-anchors “CBS This Morning” and is a correspondent for “60 Minutes.”

Known for the depth and relaxed nature of his interviews with politicians, athletes, scientists, entertainers, and thinkers, as well as a wide range of newsmakers, Rose won an Emmy Award and Peabody Prize for his 2013 interview with Syria’s President Bashar al-Assad. Other honors include France’s Legion d'honneur and being named among the world’s 100 most influential people by TIME magazine. He received the 2015 Walter Cronkite Award for Excellence in Journalism and the 2014 Vincent Scully Prize.

A native of Henderson, North Carolina, Rose earned both a bachelor’s degree in history and a law degree from Duke. He will receive an honorary doctorate at Duke University’s commencement exercises.

Duke Law’s hooding ceremony honoring the Class of 2016 will take place on May 14 at 5:30 p.m., in Cameron Indoor Stadium on Duke University’s West Campus.