China, the West, and the Future of Liberal World Order 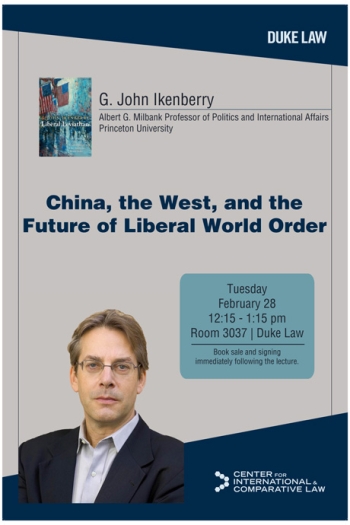 Join Professor John Ikenberry for a lunch time public lecture as he discusses his recently released book, Liberal Leviathan. Ikenberry will discuss the issues surrounding China and the United States' foreign policy, and the future of the West. Book sales and signing will follow his lecture.

The world today is in the throws of a great transformation. Power and wealth is moving from the West to the East. States are rising and declining. Economic and security interdependence continues to intensify. How do we make sense of these grand changes and what are the prospects for global cooperation in this brave new world?

Ikenberry grapples with these questions, offering a sweeping portrait of the “crisis” of the old American-led liberal order and the glimmers of the coming post-American world order. Ikenberry’s thesis is ultimately optimistic. The crisis of the old order is really a “crisis of success.” The open and rule-based character of the post-1945 system has mobilized and integrated societies and peoples worldwide, generating prosperity and security beyond the wildest dreams of mid-20th century architects of postwar order. The great global problems of today are problems of the success – not failure – of this order. Rising non-Western developing states seek more authority and leadership and the fraught challenges of rising economic and security interdependence require more complex and encompassing forms of cooperation and collective action.

Ikenberry’s message is that while the United States will need to share its hegemonic leadership with other states, the deeper system of liberal international order – organized around open and rule-based relations – is still very much in demand. The struggles today are not between a declining West and a rising Asia. The real struggle is between those who want to renew and expand today’s rule-based global order – which America itself championed for most of the postwar decades – or move to some sort of less cooperative order built around spheres of influence and power balances. These fault lines do not map onto geography nor do they split Asia and the West.

Ikenberry is the author of After Victory: Institutions, Strategic Restraint, and the Rebuilding of Order after Major Wars (Princeton, 2001), which won the 2002 Schroeder-Jervis Award presented by the American Political Science Association (APSA) for the best book in international history and politics. He is the co-author of State Power and the World Economy, which was published in 2002 by Norton Press. He has also edited a book entitled American Unrivaled: The Future of the Balance of Power. (Cornell, 2002) and co-edited The Nation State in Question (Princeton, 2003) which examines the changing capacities and roles of the modern state.

Ikenberry is also the author of Reasons of State: Oil Politics and the Capacities of American Government (Cornell, 1988); and The State, with John A. Hall (Minnesota, 1989). He is author and co-editor of The State and American Foreign Economic Policy, with Michael Mastanduno and David Lake (Cornell, 1988). He has also edited a volume, with Michael Doyle, on New Thinking in International Relations (Westview, 1997). He is co-editor with Michael Cox and Takashi Inoguchi of U.S. Democracy Promotion: Impulses, Strategies, and Impacts (Oxford, 2000) and co-editor with Michael Mastanduno of International Relations Theory and the Asia-Pacific (Columbia, 2003). This volume assesses the relevance of Western theories of international relations for understanding the emerging relations between Japan, China, and the United States.

Ikenberry has held a variety of fellowships. During 2002-04, Professor Ikenberry was a Transatlantic Fellow at the German Marshall Fund. During 1998-99, Ikenberry was a fellow at the Woodrow Wilson International Center for Scholars in Washington, D.C., which is part of the Smithsonian Institution. During 1997-98, Ikenberry was an Hitachi International Affairs Fellow, awarded by the Council on Foreign Relations in New York, and spent the year affiliated with the Institute for International Policy Studies in Tokyo. Ikenberry has also been awarded major grants by the U.S.-Japan Foundation and the Committee for Global Partnership for a multi-year project on “United States and Japanese Collaboration on Regional Security and Governance.” Ikenberry is co-faculty director of the Princeton Project on National Security, which is a large, collaborative multi-year project that is examining the changing character of America’s international security environment. Ikenberry serves on the editorial committee of World Politics and he is co-editor of the leading Japanese journal of international relations, International Relations of the Asia Pacific.

Ikenberry has served as a member of an advisory group at the State Department in 2003-04. He was also a member of the Council on Foreign Relations’ Henry Kissinger-Lawrence Summers commission on the Future of Transatlantic Relations, which issued a report in 2004. He chaired a study group on "Democracy and Discontent" at the Council on Foreign Relations in 1993-94, served as a senior staff member on the 1992 Carnegie Commission on the Reorganization of Government for the Conduct of Foreign Policy (the "Holbrooke Commission"), and co-authored Atlantic Frontiers: A New Agenda for U.S.-EC Relations, (Washington, D.C.: Carnegie Endowment for International Peace, 1993). He is also the reviewer of books on political and legal affairs for Foreign Affairs.