At Duke Law, Chris Bryant is a William Louis-Dreyfus Scholar, a member of the Moot Court Board, an executive officer of the Black Law Students Association, and the editor-in-chief of the Duke Law Journal.  Away from academics, he is an accomplished musician, an acoustic-guitar playing singer songwriter, whose thoughtful songs about community and opportunity are somewhat reminiscent of Ben Harper. It was music, in fact, that indirectly led Bryant first to teaching and then to law.

Music was a constant for Bryant as he grew up “all over the place,” with stops in Wisconsin, Missouri, and Illinois. He started with piano, learned saxophone and sang in his high school’s chorus. He dreamed of singing in an a cappella group in college.  The son of two engineers, he also loved math and science, and found an outlet for all of his interests at Duke, where he arrived as a bioengineering major and joined the university’s venerable “Pitchforks” a cappella ensemble.

The music stuck — he eventually became the Pitchforks’ president — but the science did not.  At the end of his sophomore year, Bryant switched his major to economics, which allowed him to put his math skills into practical play.  After spending the summer in New York, however, Bryant ruled out a career in investment banking.  So he was pleased when, back at Duke, he found an opportunity to move in a decidedly different direction.

Bryant remained active in the Duke Chapter of the National Society of Black Engineers even after he changed majors. Continuing a project that began in his freshman year, he worked with the group’s faculty advisor, Professor Jeff Forbes, to develop a program to train college students how to, in turn, teach middle school students to program robots.

“It was great,” says Bryant. “They programmed the robots to play soccer and to dance and accomplish ‘rescue missions’.  The kids loved it.”  During his senior year, he served as the first teaching assistant for Duke undergraduate computer science class inspired by the program, “Teaching with Robotics.”

The work led Bryant to join Teach for America after graduation.  He chose to stay in Durham, which, he says, felt like home after spending his childhood moving from place to place.  Through Teach for America, he worked for two years as a special education teacher and soccer and baseball coach at a public middle school in Durham. He found it exhausting, and emotionally difficult. “In my first three months, I was the first adult responder to six fights, two of which involved blood,” he says.  But he was fascinated by teaching, and signed up to teach math and special education for an additional year at a Durham charter school for elementary and middle-school students.

Having always found emotional respite in music, Bryant put his talents to work by implementing the school’s first music program. He found that music also made a difference to his students. “I find that music helps kids loosen up.  I like to think it helps them develop their independent, creative thinking skills.”

At the same time, music provided Bryant with a more personal form of expression.  Self-taught on guitar, he performed at clubs and cafes throughout the Triangle and came out with a CD to benefit his school’s music program, leading to a feature interview on WUNC’s popular “The State of Things”.  Many of his songs reflect his teaching experiences. One, titled “Already Lost” addresses a sentiment expressed by both teachers and students he has known.

“There was a student who asked me why he should study extra after school in order to pass sixth grade exams and make it into seventh — he’d failed the fifth grade exams and they had put him in sixth anyway,” Bryant recalls.  “And I had colleagues who wanted to know ‘Why should I even try? I’m compensated the same way if I kill myself working as if I just show movies all day long.’”

Bryant decided he wanted to work on the systemic problems in public education he was observing and exploring in his songs.  “When you see it every day, there’s only so much you can do from within the classroom as a teacher,” he says.  “I figured if there’s an answer, it’s going to come through a legal channel.”  By this point feeling rooted in Durham — and with a fiancé studying law at the University of North Carolina — Bryant returned to Duke for law school, to try to figure it out.

“I loved the Law School right away” he says. “I had a flexible schedule the summer before 2007, and I thought Civil Procedure sounded interesting. So I sent an email to Professor [Thomas] Rowe, asking if I could unofficially audit the class. He wrote right back to say I’d be welcomed. I liked the almost mathematical rules and the structure of the law. Professor Rowe was great, and I enjoyed hanging out with the summer students.”

Bryant finds law school to be “easy” compared with teaching in the public schools.  “As a teacher, there was a sense that if I did my best I could positively influence kids’ lives. At law school, if I do badly, it’s just me. I’m not letting down a classroom of kids.”  Not that he has slacked off; he has given up his late-night musical gigs in order to concentrate on classes and work long hours on the Duke Law Journal’s 63rd volume.

Still thoroughly engaged with education matters, Bryant will spend his 2L summer at O’Melveny & Myers in Washington, D.C. and in Parker Poe’s Charleston, S.C., office.  He has a clerkship lined up with Judge James Wynn on the U.S. Court of Appeals for the Fourth Circuit for his first year out of law school, to be followed by another yearlong clerkship with Judge Richard Gergel on the U.S. District Court for the District of South Carolina. And he is certain there will always be time for a little music on the side. 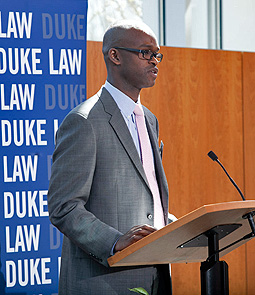