The graduates in Duke Law’s class of 2015 were urged to take on the challenges posed by an increasingly global society and to work for positive change at their May 9 hooding ceremony in Duke’s Cameron Indoor Stadium. Speakers including Dean David F. Levi and Sterling Professor of International Law at Yale Law School and legal adviser to the U.S. Department of State Harold Hongju Koh congratulated the assembled graduates on the completion of their studies and thanked their families for their support.

The graduates included 206 students receiving their JD degrees, including 16 who also earned master’s degrees from other schools  and 22 who graduated with a dual JD/LLM in international and comparative law, 95 international students receiving an LLM degree, 16 students graduating from the law school’s program in law and entrepreneurship, and eight students who completed the SJD program, the highest academic degree in law.

Levi congratulated the graduates, voicing his hope that they will continue to be a part of the Duke Law community.

“We’ve shared a lot over the past three years,” Levi said. “Our hope is that we will continue to share a lot.” 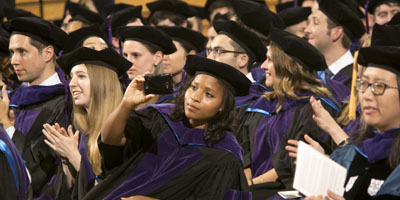 Koh, the son of Korean immigrants and former dean of Yale Law School, told the graduates to embrace international law and global interconnection. These are not threats, he said, but one of America’s greatest strengths.

To underscore his point, he told students that when he represented the U.S. at  the United Nations, he was approached by a counterpart from another country.

He also said that individual values should be the guiding light for legal careers.

“Live your values, they make you who you are,” he said. Regardless of the nature of their practice, Koh said, lawyers ultimately serve one client: “The integrity of the law itself.”

Kambayashi, a lawyer from Japan, said that he and the other international LLM students were eager to “bring all that we have learned back to our home countries.” He acknowledged the support and sacrifice of their relatives, many of whom traveled from the 42 countries represented by the 2015 LLM class. The graduates included Duke Law’s first students from Afghanistan, Belize, Kosovo, and Oman.

The 2015 graduation celebrations began with a gala in Star Commons on May 7, andthe presentation of the annual student-selected Justin Miller Awards and the class gift. Graduation events continued on May 10 with the presentation of the Faculty Graduation Awards, given to students for outstanding academic performance and service, a family barbeque at the Sarah P. Duke Gardens, and a candlelight dinner in Star Commons for international LLM graduates and their families.