The Justin Miller Award winners are selected by their peers as demonstrating the highest levels of citizenship, leadership, intellectual curiosity, and integrity during their time at Duke Law. 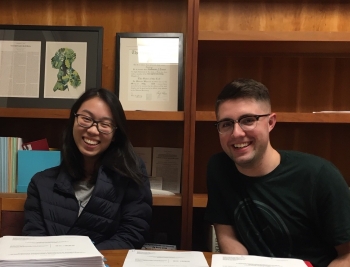 Amanda Ng and David Gardner, who shared the Justin Miller Integrity Award, were clinic teammates in both the Health Justice Clinic and the Immigrant Rights Clinic.

The Class of 2020 began its slate of virtual graduation events on May 8 with the presentation of the Justin Miller Awards that honor the memory of the Law School dean who implemented the values that remain foundational to the Duke Blueprint to LEAD during his tenure from 1930 to 1934.

Students in the graduating JD class nominate peers for the four awards that honor the values of leadership, integrity, citizenship, and intellectual curiosity. LLM graduates honor a classmate for demonstrating outstanding leadership and community participation during their time at Duke Law.

Michael Wajda ’20 received the Leadership Award, which honors “someone who has been especially active in the Law School and/or the greater Durham community, who demonstrates initiative and leads by example.”

Presenter Brent McKnight ’21 said that Wajda “has taken leadership roles in so many different student organizations and pro bono projects that, honestly, it is hard to keep count.” Among Wajda’s many roles and accomplishments he listed included service as a student ambassador for the Office of Admissions, as a LEAD fellow twice, president of the Federalist Society, coordinator of the Twiggs-Beskind Tournament, student coordinator of the Cancer Pro Bono Project, mentor for the Government and Public Service Society, volunteer for the Volunteer Income Tax Assistance Project, and articles editor for Law & Contemporary Problems.

“However, it is not simply the fact that he spends all his time with these activities,” McKnight said. “It is the quality of the work he puts into them. His personal philosophy is to always leave a place better than how it was when he arrived there. He lives up to that promise every day. He is the ideal Duke Law student leader. More importantly though, he is a man of integrity, and he treats each leadership position as an opportunity for service.”

Lauren Jackson ’20 received the Award for Intellectual Curiosity, which honors a student “who truly enjoys learning” and who has “an intellectual hunger and passion for the law and consistently shares this with and encourages it in others.”

Presenter Jason Wasserman ’20 called Jackson a “brilliant scholar” and “the person we all look to when trying to find the one person in the class who knows what’s going on.” He added:“Some people study for a grade. Our winner not only gets the grade, but continues studying for the love of the work.”

Dani Bembry ’20 received the Award for Citizenship, which is given to a student who has “a genuine enthusiasm for the Duke Law School community” and “who brings people together in constructive ways.”

In presenting the award, John Collins ’20 said Bembry “is constantly raising the bar for us all in how much she cares about others. She uses her voice to make sure everyone is on an equal playing field with school resources and knowledge.” He added that Bembry continually offers support and advice to other students. “For the past three years, she has gone above and beyond in acting as a mentor figure for countless members of the Duke Law community, especially in BLSA, demonstrating patience and empathy.”

Two graduates, Amanda Ng and David Gardner, received the Award for Integrity, which recognizes a “courageous person with strong principles, a solid character, and a true sense of altruism.”

Ng presented the award to Gardner, calling him “one of the rare people who has managed to successfully align their strong personal values with their professional goals.” Gardner, she said, “contributes to and elevates our community without need for recognition,” citing his work with the Cancer Pro Bono Project, Lawyer on the Line, and the Duke Journal of Gender Law and Policy. “He never fails to treat everyone with respect and consideration, and exemplifies what it means to lead by example.”

In presenting the award to Ng, Kristopher Fernandez ’20 praised her consistent demonstration of “a commitment to service, justice, and welfare for all, not just the privileged few.”

He highlighted her work with the Health Justice Clinic, the Guardian ad Litem program, and the ACLU among other organizations. “She has followed through with all of these programs while other, less committed people only take them on for one or two years,” he said. “She truly believes in wielding her legal education as a shield on behalf of those who do not have the resources to do so themselves.”

The LLM Award for Leadership and Community Participation was given to Diane Amado LLM ’20. The award is given to a student who engages with the Law School community while showing leadership among LLM students and makes “effective efforts to promote integration of LLM and JD students.”

In presenting the award, Maria Jose Alarcon LLM ’20, described Amado as “a leader of kindness” and a true global citizen who integrates different groups within the class and “who has made our LLM an amazing experience, organizing events and making everybody feel at home.” She noted Amado’s readiness to help any classmate in need and her engagement with the Business Law Society and the Women Law Students Association. “She is always empowering women and men and she is always helping us unite in diversity," Alarcon said.

The award recipients each received an engraved, crystal gavel. In addition, a book was selected and given by the J. Michael Goodson Law Library in their honor.