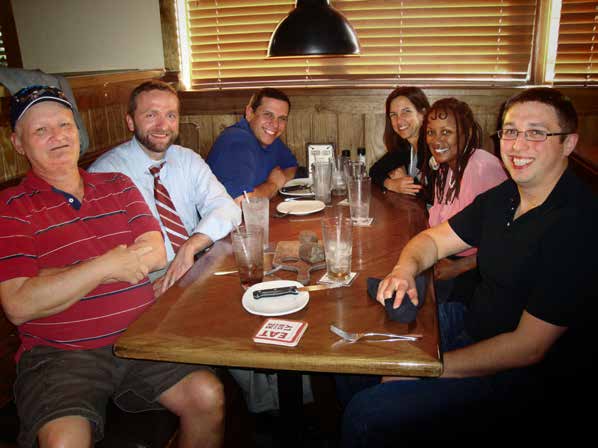 Over a period of five years, three students and one alumna fought to get a veteran benefits — and they won

When Michael Morgan met Christine Lehr ’96 at a client intake meeting organized by Duke Law School’s Veterans Disability Assistance Project (VDAP) in July 2009, he was homeless, destitute, and sick. Morgan, who served in Vietnam as a radio operator during an eight-year career in the U.S. Navy, had several claims and appeals in process with the Veteran’s Administration relating to his military service. He was unable to pursue his career as a photographer due to myriad health problems, living in his truck, and “understandably frustrated” by long delays and repeated denials of his claims, said Lehr, a partner and the pro bono coordinator at DLA Piper in Raleigh, who had volunteered to supervise Duke Law students on veterans’ disability claims.

“Who knew that it would take nearly five years, three law students, and countless hours for Mike to finally receive an award of 100 percent disability,” said Lehr after the VA came to that conclusion last summer. She supervised successive student VDAP volunteers — Thomas Crosby ’11, Ben Kastan ’12, and Nick Atallah ’14 — as they worked on several separate claims and appeals on Morgan’s behalf, including a hearing before the Board of Veterans’ Appeals. The claims, including ones relating to post-traumatic stress disorder (PTSD) and neck and shoulder injuries, stemmed specifically from a beating Morgan sustained on a U.S. naval base in Okinawa in 1972. Morgan shared his story with Duke Law Magazine.

Those Duke students, they pushed my claim through and got me the help I needed.

"I’m diabetic from exposure to Agent Orange. I filed my original claim with the VA in 2002 just for the diabetes, and that’s what I got benefits for. But the reason why I ended up needing [the students’] help is an incident I had mostly blocked out. I didn’t know much about PTSD, and nobody knew about it back when I was serving.

"I had worked through the pain of injuries and psychological trauma as long as I could. But as a photographer you have to carry around a lot of equipment and it became impossible to work. My main problem is cervical damage — major neck problems. Four vertebrae have major damage, and my whole upper left side, hand, arm, it all goes dead, it shuts down. I never know when it’s going to happen.

"I kept telling doctors that it was from this beating that happened in 1972. There was an incident report in my medical file, but I never knew what to make of it before.

"To this day, I still don’t remember everything that happened. All I remember is getting to Okinawa after an 18-hour mission. We were on our way over [to the Enlisted Men’s club] and we got jumped by five guys. I woke up three hours later in the Air Force dispensary. I should have been taken to the hospital, but I never was. I was in bed for three days before I finally fully came to and asked what had happened.

"My shrink diagnosed me with PTSD in 2006 or 2007. It became a long, drawn-out thing trying to get my benefits. Instead of fully investigating my medical record, they — the VA — fought and fought. I had so much medication for the psychological issues resulting from PTSD, and from the pain, it was unbelievable. And I couldn’t get the Navy to give me what I was owed. I was stuck in the claims process. I became very depressed and attempted suicide at one point.

"But it said, right there on the incident report [after the beating], that in addition to the injuries, I was recovering from ‘post-traumatic amnesia.’ That was the link that eventually helped me fight for my benefits. The last claim that the Duke students worked on was successful.

"I’m a fighter and they helped me fight. They used that report from 30 years ago to show my PTSD and to show that my neck injuries were something I deserved help with. I did for myself as long as I could, but things had gotten to a low point. Those Duke students, they pushed my claim through and got me the help I needed. I don’t have to wonder about my housing situation, how to get money for food. I can concentrate on my health." 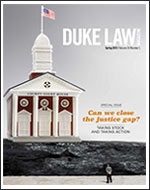